Amazon.com Inc. shares slid 1.3% Thursday while bricks-and-mortar store operators rallied, after the Supreme Court ruled that states have the right to collect sales taxes on internet companies that do not have a physical presence in their states.

The 5-4 ruling “would give every retailer the opportunity to compete on a level playing field without government’s thumb on the scale,” said the Retail Industry Leaders Association.

Wayfair Inc. said in a statement that it “already collects and remits sales tax on approximately 80% of our orders in the United States, a number that continues to grow as we expand our logistics footprint.” The online furniture retailer doesn’t expect the ruling to have a “noticeable impact” on its business.

Amazon AMZN, -1.06%[1]  already collects sales taxes for its own goods [2]in every state that has such a tax, or 45 states or commonwealths, plus the District of Columbia.

The company dropped its long-held resistance to sales tax in recent years, after greatly expanding the number of distribution centers, warehouses and data centers that it operates across the U.S. to speed up delivery times.

But a loophole meant that third-party vendors who sell their products on the Amazon site were not subject to sales tax. It’s not clear whether the new rule will impact small sellers. South Dakota rules require at least $100,000 in annual sales in the state to be taxed. ... 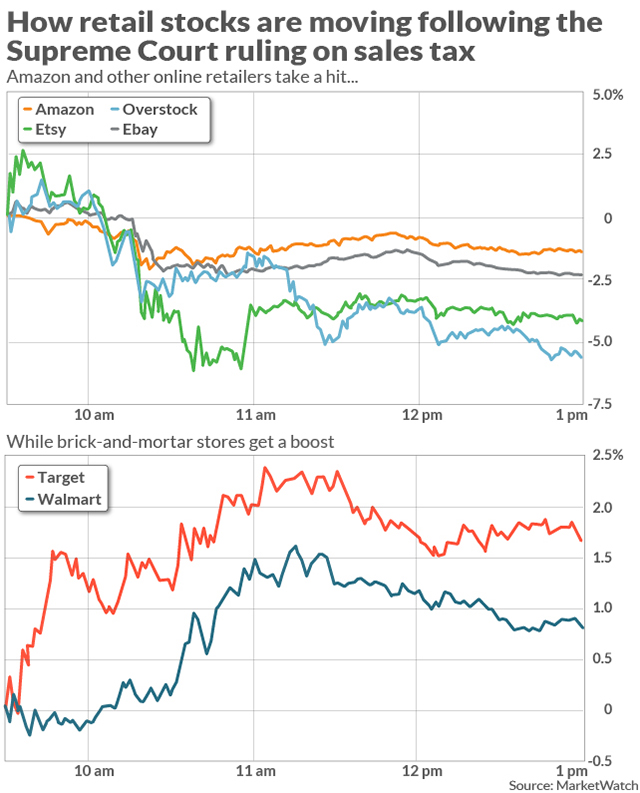 The Institute for Policy Innovation, a nonprofit think tank that says its approach to governing is one that focuses on the “strengths of individual liberty, limited government and free markets,” is disappointed with the ruling. “The decision leaves e-commerce and especially small sellers extremely vulnerable to states gluttonous for tax revenue particularly from consumers and businesses with no presence in their state,” Tom Giovanetti, the group’s president, said in a statement. To protect small businesses, Giovanetti says Congress must now put legislation in place “with a significant small business exemption, a substantial, defensible nexus standard, and a safe harbor for small sellers complying in good faith with the requirements of the law.” Moody’s said the news was positive for bricks-and-mortar retailers. “In the case of Amazon, its proprietary sales will be largely unaffected as it is already collecting sales tax in ‘sales tax’ states in which it operates a physical presence, however, the impact on its growing third-party business could be meaningful as, up until now, a chunk of these sales have not been taxed,” said Moody’s lead retail analyst Charlie O’Shea. Read: These 6 stocks help you build an anti-FAANG portfolio that will beat the ‘Amazon effect’[3] “As Amazon has continued to thrive despite losing the obvious pricing benefit it used to have

More in this category: « UAE Officers Film Themselves Raping, Torturing Men In Yemen "Hidden Prisons" BofA: 40% Of Margin Expansion In The Last 20 Years Is From Globalization »