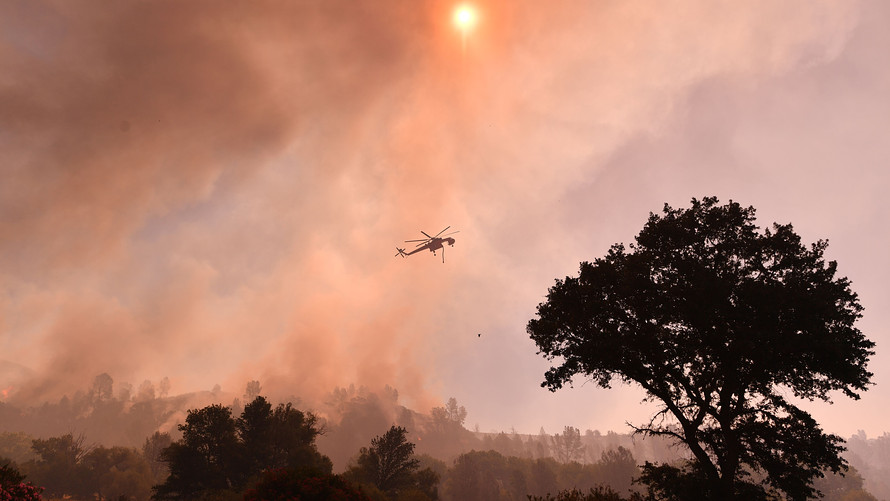 San Francisco is already one of the most Instagrammed places in the country. But Sunday morning, the city itself looked like it was inside an Instagram filter.

Smoke from nearby Northern California wildfires blanketed the Bay Area, and combined with fog to create a surreal, sepia-toned look.

Smoke from the Northern California fires is filtering the sunlight. It's like looking through amber-colored sunglasses.@NoeValleySF @KarlTheFog pic.twitter.com/1PqC9pvqpk[1][2][3]

Today there is heavy fog in San Francisco and big fires north of here and the smoke and ash are mixing with the fog and making everything sepia toned. This footage has no filter applied to it. pic.twitter.com/aBKwlTBk9Y[5]

Ever wondered what happens when smoke from #YoloCounty fires meets #SF fog? pic.twitter.com/rhDI4yiGdi[18][19][20]

In Alameda looking toward San Francisco. Normally you can see the city. That’s smoke. Ash falling on everything. pic.twitter.com/MMzaznuekJ[22]

Smoke from the #CountyFire moving directly over the central San Francisco #BayArea, as seen on today's #MODIS image. Still getting some ash falling in #SF though the smoke plume is still mainly above the surface marine layer. #CAwx #CAfire pic.twitter.com/rHzYB9pFjs[24][25][26][27][28][29][30]

Despite the haze and reports of ash falling like snow in some parts of the Bay Area, regional authorities reported fairly good air quality, as the fog essentially filtered the smoke. Still, a smoke advisory was in effect with warnings for the elderly, children and people with heart of lung conditions.

The smoke was the result of the County fire in Yolo County, about 75 miles northeast of San Francisco. As...

Read 1882 times
Tweet
Published in Economics
More in this category: « Hedge Fund CIO: "With America Now Out Of Sync With Everyone, It Will Start A Series Of Crises" Axios Leaks Trump Bill To Blow Up World Trade Organization »
back to top