To be sure, fear of missing out is an unhelpful emotion for all investors, not just retirees. But it is especially so for them, since they are predisposed anyway to thinking that the world is passing them by. This belief manifests in the investment arena in the suspicion that most other investors are making a killing, which in turn leads to the sometimes irresistible temptation to follow those who are seemingly making the most money.

That belief is not just wrong, its associated temptation is downright dangerous. And in this column I show just how dangerous it is.

Consider first a recent study of social trading platforms[1] conducted by six researchers at the University of Regensburg in Germany. The study focused on two websites — Wikifolio[2] and Ayondo[3] — that allow users to mimic the portfolios of any other users on their sites. Those websites also publish the investment performance of each user, so someone intent on following the winners can easily do so.

For Wikifolio the study analyzed the more than 3,900 investible portfolios from November 2013 to January 2016, and the nearly 2,200 portfolios at the Ayondo site from April 2009 to January 2016. The researchers measured how much money you have made on each site by always following the portfolio with the highest reported return, and the picture isn’t pretty. On Wikifolio, such an approach would have lost nearly 79%, and even more on Ayondo — a loss of 92%.

(These huge losses are reflected in the first and third columns in the accompanying chart — referred to as “return chaser” strategies since they called for switching into whatever strategy had the best trailing return.)... 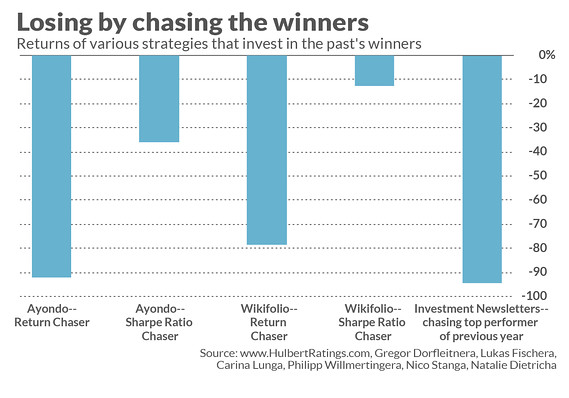 Why did return chasing produce such huge losses? In large part because a strategy of following the top performers inevitably meant following extremely risky strategies. Sooner or later, of course, those risky strategies crashed and burned. This is a subtle but crucial insight. The only way for advisers to have any chance of showing up at the top of the performance sweepstakes is by taking huge risks. In most cases these advisers will lose big and be at the bottom of the rankings; but occasionally one of them will strike it rich and show up at the top of the rankings. This means it’s very unlikely you will ever see at the top of the rankings an adviser who instead pursues a sound and reasonable “slow and steady wins the race” approach. This insight is confirmed by another strategy the authors also analyzed: This alternate one automatically followed whatever portfolio was at the top for risk-adjusted performance (as measured by the Sharpe ratio). Adjusting performance for risk penalizes the riskiest strategies and benefits the slow-and-steady approaches. And, sure enough, this alternate approach didn’t perform nearly as bad as the first one. But it