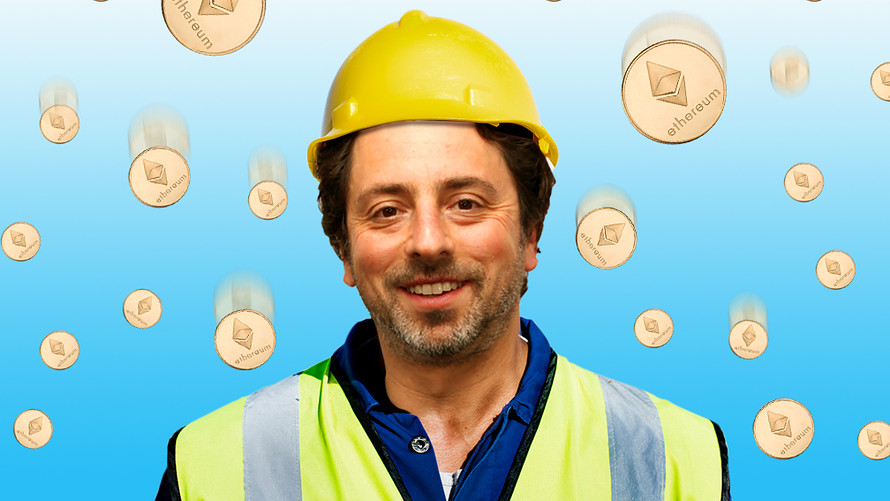 Google may ban ads for cryptos, but that isn’t stopping Sergey Brin, one of its founders, from making a few bucks mining Ethereum ETHUSD, -2.24%[1] the second-biggest digital currency behind bitcoin BTCUSD, -0.71%[2]  .

“A year or two ago my son insisted that we needed to get a gaming PC,” Brin told a gathering[3] at a blockchain conference in Morocco over the weekend. “I told him if we get a gaming PC we have to mine cryptocurrency. So we got an Ethereum miner on there and we’ve been making a few pennies and dollars since.”

With a net worth of about $54 billion, the Alphabet GOOG, +0.86%[4]  president clearly isn’t doing it for the money. Rather, think of it more as research, considering Brin admits he doesn’t know “a whole lot about cryptocurrency.”

He also acknowledged that Google missed an opportunity to be an early adopter in “mind-boggling” blockchain technology. “We probably already failed to be on the bleeding edge, I’ll be honest,” he said, adding that perhaps Google X, the company’s research division could get involved.

“I see the future as taking these kind of research-y kind of out there ideas and making them real — and Google X is kind of like that,” Brin said.

Click here[5] to see him speak at the conference.

The chief executives of two large graphics-chip manufacturers, Nvidia NVDA, +0.51%[6]  and Advanced Micro Devices AMD, +1.62%[7] have insisted during a boom in sales attributed by some analysts to crypto-mining that gamers are buying cards and using them for mining on the side.

“A lot of gamers, when they aren’t playing games, they’re doing a little mining,” Nvidia CEO Jensen Huang told MarketWatch in a May interview[8] after reporting nearly $300 million in crypto-related revenue. “The reason why they bought it is for gaming, but while they’re not gaming — while they’re at school, at work, in bed — they’ll turn it on and do a little mining.”

While some have scoffed at that claim, Brin’s description is a high-profile example of that trend.

More in this category: « Mish Rages At More "Give Everybody Free Money" Idiocy Turkish Lira Tumbles After Erdogan Appoints Son-In-Law As Finance Minister »