Apple Inc.’s most recent iPhone lineup may not have launched with the momentum that investors initially hoped for, but analysts say it has had staying power.

A greater portion of iPhone buyers are choosing phones from Apple’s AAPL, -0.12%[1]  latest line than chose from the then-most recent line a year ago, according to research from M Science, which looks at alternative data such as mobile-device activations.

In other words, iPhone buyers in May were more likely to pick one of Apple’s newest iPhone models than iPhone buyers last May were, the analysts said. 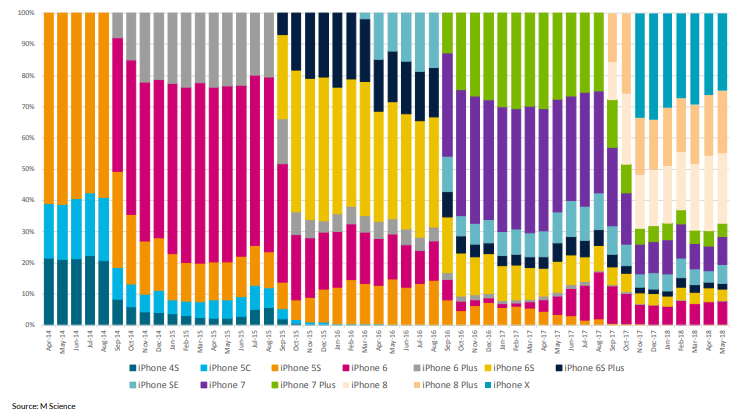 M Science
The iPhone X may be the best-selling model on its own, but it’s being outperformed by the iPhone 8 family, which includes the 8 and 8 Plus.

“We didn’t see that in the first six months of the lifecycle,” said M Science analyst Matt Goodman, whose firm tracks monthly sell-through of iPhones across the world. For much of the current iPhone cycle, the latest lineup underperformed the prior lineup on a relative basis. The mix shift toward newer devices “has positive implications for ASPs,” Goodman said, referring to the iPhone’s average selling price.

Don’t miss: Here’s how much Apple could make from streaming[2]

Apple Chief Executive Tim Cook shared on the company’s last earnings call in May that the iPhone X was the top-selling model in every week of the March quarter, and M Science’s data show that the device has continued to be a top performer. However, while the iPhone X is doing better in terms of sell-through than the company’s other models are on their own, it’s being increasingly outperformed by the iPhone 8 family. The iPhone 8 line also came out last fall and includes both the 8 and 8 Plus.

“Some of that could be that you have the iPhone X refresh coming up, or that people willing to spend $1,000-plus on a phone have already done so” Goodman told MarketWatch.

Apple is expected to release three new phones again this fall, and one popular rumor[3] is that the company will introduce 6.5” and 5.8” OLED models as well as an LCD model. The iPhone X is currently the only OLED model and has a 5.8” screen.

See also: Here’s what could happen to Apple’s average selling prices in the next iPhone cycle[4]

One notable data point from M Science’s chart concerns the iPhone 6, which has “seen a real resurgence” over the past year, according to Goodman. The iPhone 6, launched in 2014, is doing well at prepaid carriers and is also a low-cost option in emerging markets, he said. The phone made up between 5%...

More in this category: « Brexit Doomsayers Could Not Have Been More Wrong, So Why Believe Them Now? "Past Point Of No Return": World Markets Tumble Amid Global Trade War Shockwaves »