The yield curve has captured Wall Street—and to a lesser extent Main Street’s—attention in recent weeks. And for a good reason. The past nine recessions have been preceded by the inversion of the curve, where short-term Treasury rates exceed their long-term counterparts.

Much of the breathless attention on the shape of the curve has centered on the tightening gap between the 2-year TMUBMUSD02Y, +0.32%[1]  and 10-year Treasury yields TMUBMUSD10Y, +0.42%[2] But there are other key pairs that can signal how investors are thinking about where the economy is headed from here.... 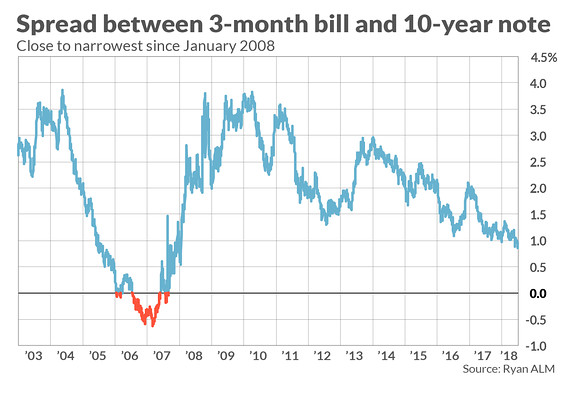 While 2s-versus-10s garners the most attention, many economists and Fed officials tend to focus more acutely on the gap between the 3-month bill and the 10-year note as the best signal, if it inverts, of an impending recession. This relationship, which grasps the more dramatic difference between very near-term rates and a reasonable point of time in the uncertain future, has a better record, these researchers say[3]. The probability of a recession over 12 months gradually climbed to 40% in 2008 from less than 10% when the 3-month-10-year spread inverted substantially in June 2006, according to data from the New York Federal Reserve. 5-year note and 30-year bond 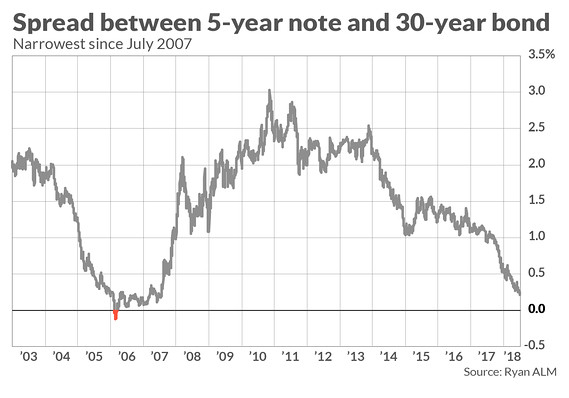 The gap between these Treasury pairs tends to be viewed as a good read of inflation expectations and economic strength. A weaker economy and flagging inflation expectations, which chip away at a bond’s fixed value, can result in a tighter yield spread, said Jim Smiegel, chief investment officer of absolute return strategies for SEI Investments. 7-year and 10-year notes 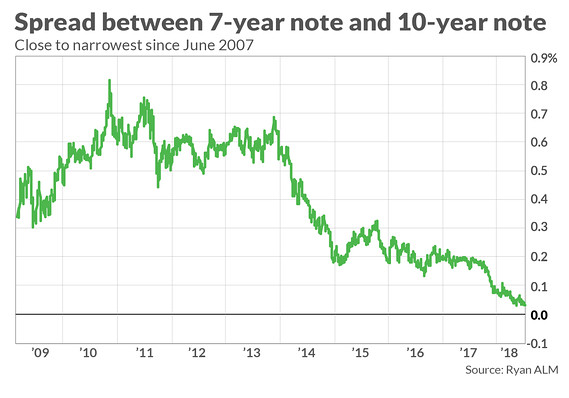 A canary in the coal mine, an inversion between the 7-year TMUBMUSD07Y, +0.45%[4]  and the 10-year notes implies that other parts of the curve may soon invert, according to Ian Lyngen of BMO Capital Markets. He found that when the yield gap between the two maturities fell below zero in 1988, other pairs also soon inverted. 10-year note and 30-year bond 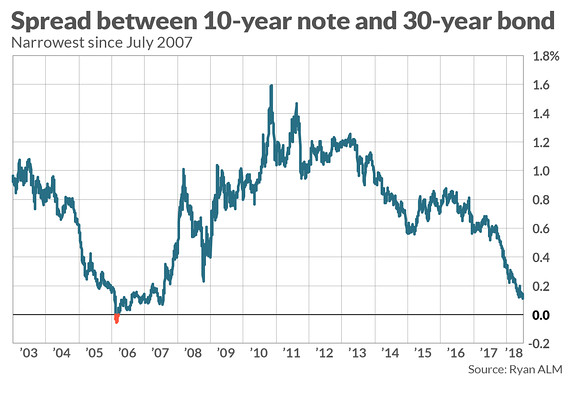 The gap between the 10-year note and the 30-year bond isn’t widely watched by professionals but it is another fault line in the yield-curve dynamic that could presage ill for the market DJIA, +0.38%[5]

Read 345 times
Tweet
Published in Economics
More in this category: « Bitcoin Bounces Back Above $6500 After BlackRock Creates Crypto Team "The Best Is Behind Us": How A $139 Billion Fund Is Preparing For The Worst »
back to top