If emerging market bond investors are worried about a trade war, they’re not behaving like it.

A look at the relative returns of emerging market bonds across countries found that investors weren’t shunning debt from trade-dependent economies, behavior that would usually be expected if market participants feared a trade war, said Richard Briggs, senior emerging markets analyst at CreditSights, in a Thursday note.

“While questions abound over the recent trade tensions, so far it’s hard to square the countries’ credits which have been hardest hit in the recent EM selloff and those that should in theory be most vulnerable to trade tensions,” said Briggs.

He points out Mexico’s exports to the U.S. represents more than 25% of its gross domestic product, easily outweighing its outbound trade to the rest of the world. Yet its bond returns have been relatively immune to Trump’s threats to end the North American Free Trade Agreement[1]. As of July 13, the excess return of Mexico’s dollar-denominated sovereign debt is down 0.04% this year, meaning that its yield spread against risk-free U.S. Treasurys has barely budged.

On the other hand, Turkey and Argentina have suffered the brunt of the emerging market selloff even though they weren’t large exporters to the U.S., or even to other countries. Argentina’s dollar-denominated bonds slumped more than 12% on an excess return basis, while Turkey’s bonds lost more than 9%, Briggs found.

And most of the concerns swirling around these two notable casualties of the emerging markets downturn were based on their ability to weather an attack on their domestic currencies, said Briggs.

Argentina’s reserve stockpile rapidly dwindled as its peso USDARS, +0.3801%[2] fell to a record low against the dollar in May. And Turkey’s central banks has been unwilling to raise interest rates to prevent a further drop in the lira USDTRY, +0.4652%[3] accelerating its fall. 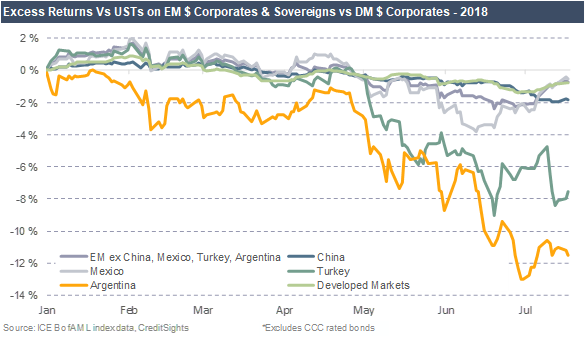 Briggs conceded that trade concerns were one of the reasons Wall Street soured on emerging markets. As the narrative of global synchronized growth falls to the wayside, analysts said a trade conflict between the U.S. and its major trading partners would present an additional headwind to emerging markets already struggling with a slowdown in economic conditions.

The Citi economic surprise index for emerging markets, a gauge of how data has performed above analysts’ forecasts, fell to negative 26.70 in mid-June, its worst reading since October 2014.

Such fears have pushed a few investors toward the exits. The pace of capital outflows from emerging market economies accelerated to $40 billion...

Read 558 times
Tweet
Published in Economics
More in this category: « Trump Turns Down Putin Request For Interrogation Swap Portland Police Union President: "Our City Has Become A Cesspool" Due To Homelessness Surge »
back to top