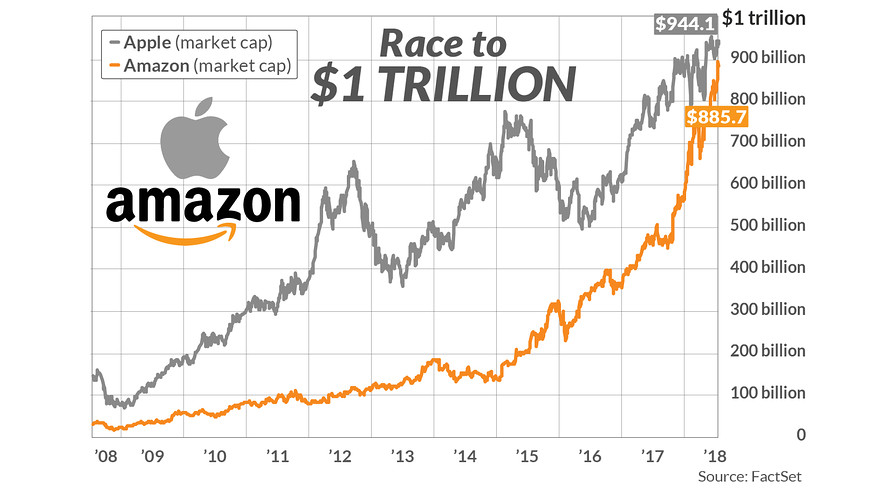 For years now, Apple has been on a relentless push to become the first company to reach $1 trillion in market capitalization. It seemed like a foregone conclusion: The lofty valuation crown would belong to the tech darling. Just a matter of time.

Apple still holds the edge with a market cap of $944 billion, but Amazon, riding another strong showing on Prime Day[1], just crossed $900 billion for the first time this week and, despite a dip to $886 billion in Thursday’s session, it seems to have momentum, and popular opinion, on its side.

Amazon AMZN, -1.63%[2] which reports earnings next week, banged out a fresh high on Wednesday and is up more than 50% for the year, while Apple AAPL, +0.78%[3]  hasn’t broken into uncharted territory since June and is up only about 12% year-to-date. Apple reports on July 31.

MarketWatch asked followers who they think has the upper hand in the race for $1 trillion, and, so far, it’s not particularly close. Earlier, Amazon held a 73% to 27% lead, though that has since inched down to a 67% lead.

Which company will be the first to hit a $1 trillion market cap?

But not everybody was bullish enough to make a pick:

Which one won't be in business in 20 years?

That’s a poll for another day.

More in this category: « Why you should buy shares of companies whose CEOs have skin in the game The Day "Strategic Ambiguity" Died »