Enthusiasm for Tesla Inc.’s Model 3 is “waning,” analysts at Goldman Sachs said in a note that was the second Wall Street report Monday to express pessimism about the Silicon Valley auto maker’s second-quarter results.

Goldman analysts looked to gauge sentiment on the Tesla TSLA, -3.29%[1]  Model 3 by analyzing daily social-media posts and categorizing Twitter and Reddit posts as positive, negative, or neutral. The buzz has skewed negatively recently, they said.

They found that weekly posts about the Model 3 declined from an average of 3,900 a week last year to an average of 3,000 a week this year; posts with a positive skew have faded, they said. ... 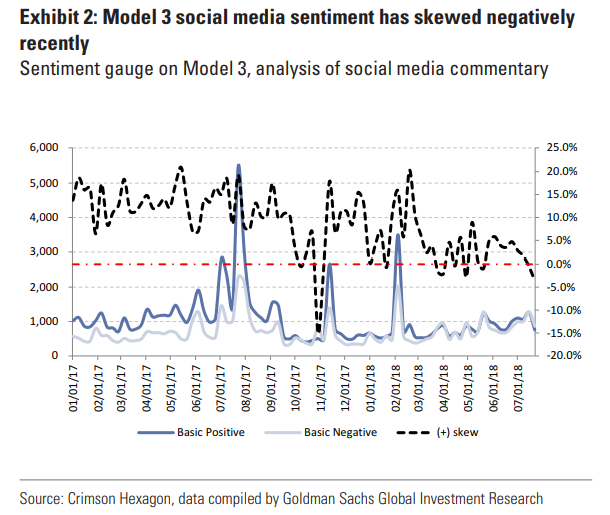 “With the recent increased availability of the Model 3 and increased production, we note a lack of peak (which would indicate significant buzz around the product) in social media posts,” they said in the note. Goldman’s note was not the only one to paint a more pessimistic picture of Tesla on Monday. Analysts at UBS, also known bears on the stock, predicted that Tesla may well swing to a profit in the third quarter, but it won’t be sustainable. Tesla switched its Model 3 ordering system to allow customers to essentially pre-pay $2,500 and configure their Model 3s immediately, from a $1,000 refundable down payment. As only more expensive versions of the car are available for configuration, that plan “will drive abnormally high mix and margins” in the third quarter, the UBS analysts said. “We believe this will drive a profit in Q3 which will not be sustainable as prices normalize,” they said. Related: Ford keeps investors in the dark, and shares pay the price[2] Goldman Sachs and UBS have the lowest stock price targets on Tesla among major investment banks; Goldman with a six-month price target of $195 and UBS with a 12-month $195 price target. The targets represent 33% downside from the current price. On average, Wall Street has a $303.82 price target on Tesla, equal to upside of more than 3%. UBS and Goldman kept their sell rating on the shares. Tesla is expected to report second-quarter results on Wednesday after the bell. Analysts surveyed by FactSet expect an adjusted loss of $2.88 a share on sales of $3.99 billion. That would compare with an adjusted $1.33 loss on sales of $2.79 billion in the second quarter of 2017. The post-results call comes amid concerns about Chief Executive Elon Musk’s recent outbursts on social media, and with the memory of a “truly bizarre” first-quarter call still fresh on Wall Street’s minds. Read more: Tesla earnings: Gear up for more drama after Model 3 production burst[3] It also follows worse-than expected second-quarter results for General Motors Co.

More in this category: « Cop Assaulted, Head-Butting, And A Bloody Nose After Another Brawl At Trump's Hollywood Star "It's Different This Time": One Bank Has Some Very Bad News For Bulls »