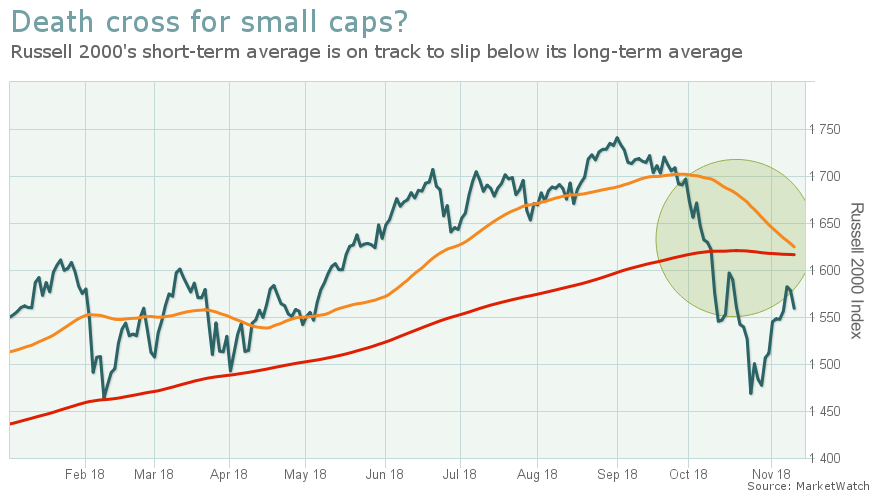 Don’t look now but a closely followed gauge of small-capitalization stocks is on the brink of a bearish pattern.

The small-cap Russell 2000 index RUT, -2.04%[1]  is within a few points of seeing its short-term 50-day moving average fall beneath its long-term 200-day moving average, a formation in an asset that many chart watchers believe marks the point that a short-term decline morphs into a longer-term downtrend (see chart attached).

According to FactSet data, the Russell’s 50-day moving average is at 1,624.56, while the 200-day stands at 1,616.23, as of Nov. 9. That is an 8.33-point differential, or 0.5%, that means that the Russell 2000, which has been seeing a steady rate of decline over the past few weeks could see a so-called death cross manifest as early as next week, should the current downtrend hold.

Shares of smaller companies had climbed more than their larger counterparts because they were viewed as more resilient amid growing concerns about the U.S.’s trade spat with China. Small-cap companies derive the lion’s share of their revenues domestically.

The Russell hasn’t been as resilient to recent pains as it was in earlier weeks. Its latest decline comes amid heightened concerns about the pace of rate increases by the Federal Reserve and the strength of the global economy. These are factors hitting the broader market. On Friday, with the Russell down 1.8% in afternoon trading, the Dow Jones Industrial Average DJIA, -1.00%[2]   and the large-cap S&P 500 index SPX, -1.31%[3]   were both falling sharply, threatening to register their worst declines in November after an ugly October period drove the Nasdaq Composite Index COMP, -2.17%[4]   into correction for the first time in two years and briefly erased year-to-date gains for the other main benchmarks.

Read 406 times
Tweet
Published in Economics
More in this category: « Iran's Leadership Must Decide "If They Want Their People To Eat" - Pompeo Europeans React To US Elections »
back to top