Barely 16 points stand between the S&P 500 and the death cross and when that dreaded threshold is breached, investors may have to kiss the Santa rally goodbye this year.

Analysts at Bespoke said that the large cap index, absent a dramatic rally, is likely to see its 50-day moving average fall below the 200-day moving average which will form a death cross. The pattern , when confirmed, is often viewed by strategists as an early warning signal of a bear market, though when it comes to the S&P 500, it hasn’t proven quite so ominous.

“The measure is supposed to capture accelerating downside momentum that typically kicks off long trends lower in price,” said the analysts in a report. “Barring a very large rally from the S&P 500 in a very short time, we’re likely to see an S&P 500 death cross in the next couple of weeks.”

Stocks are trading lower[1] Thursday as trade-related worries weighed on the market but major benchmarks are higher for the week, thanks in part to comments on interest rates from Federal Reserve Chairman Jerome Powell which were viewed as dovish. Stocks soared after Powell’s speech on Wednesday, which some investors viewed as a signal the Fed will be less aggressive than previously expected in raising interest rates next year.

Read: Did Fed’s Powell ‘light the fuse’ for a year-end stock-market rally?[2] 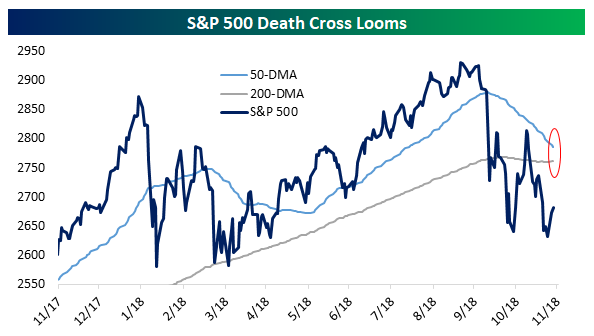 Historically, death crosses are not a common occurrence for the S&P 500 and they have happened only 12 times since 1928. And belying the reputation for doom and gloom, for of those occurrences have occurred during the current bull market. “The fact that we haven’t seen a bear market following four separate instances of a death cross since 2010 is a good example of why ‘death’ might be a slight exaggeration,” the analysts said. Still, they do tend to wreak havoc in the short term. The S&P 500 generally drops in the week and the month after the cross has formed, as shown in the table below: 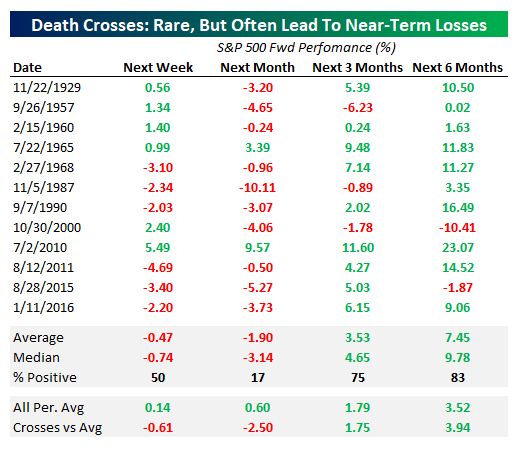 Timing wise, that would include December, when the so-called Santa rally typically occurs, raising the odds that investors should not bet too heavily on the big bounce in stocks that is often witnessed at the end of the year.

“We also note the S&P 500 averaged declines more than 80% of the time in the month after death crosses,” the analysts...

More in this category: « Was Yesterday's Rally The 'All Clear' Signal Or More Noise? Here's Why GE Is Tumbling, Again »