Finding an affordable place to live in the tech-rich Bay Area isn’t easy these days, but it sure seems to be getting easier — a lot easier. That is assuming Wolf Richter of the Wolf Street blog[1] has it right.

In fact, according to data provided by the National Association of Realtors, he points out inventory has more than doubled from a year ago.

Just take a look at this chart:... 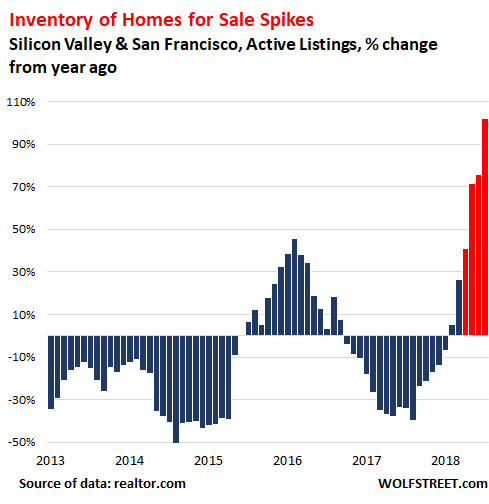 As the chart shows, the number of active listings has risen in each of the past three months, and now we’re at levels not seen since 2014. Richter says the red bars signal “bubble trouble” in the housing market. Now, we’ve got buyers refusing to participate in the bidding wars that have been a hallmark of the red-hot sector for years. “They see the prices and they do the math with higher mortgage rates, and they walk,” Richter said. “So, motivated sellers have to do something to move the properties. And they started cutting prices.” And that brings us to chart #2, which shows the number of properties for sale with price cuts has exploded by over 400% year over year. 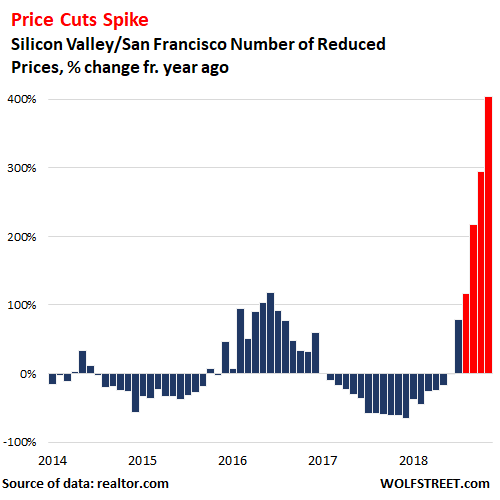 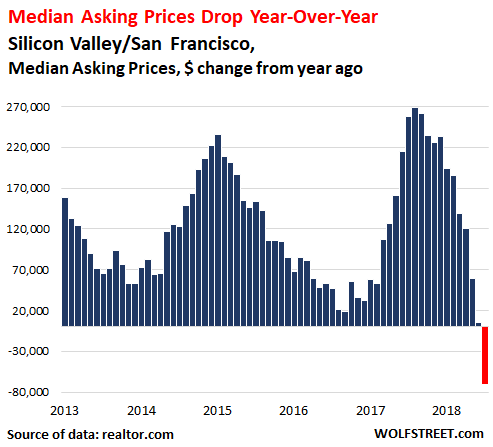 The median asking price peaked in May was at $1,369,200 and has since fallen by $132,100 or by nearly 10%, to $1,237,100, Richter wrote. “After years of blaming the surging home prices in the area on a shortage of inventory for sale,” he said, “the industry is suddenly faced with all kinds of inventory coming out of the woodwork, just as sales are slowing and as mortgage rates are rising, while the affordability crisis bites the market.” Richter warns that what’s especially worrisome about this trend is that the tech boom is still, for the most part, thriving. No real signs of hiring slowdowns or layoffs, and the tech start-up market is also going strong, he says. “Though share prices of local companies such as Google-parent Alphabet Inc. GOOG, -3.01%[2] Apple AAPL, -3.57%[3] Facebook FB, -1.58%[4] and many others have taken a big hit since the summer, we’re still far

More in this category: « If US Quits INF Treaty, Europe Loses Watch: New Video Surfaces Of Russian Combat Laser As US Threatens To Abandoned INF Treaty  »