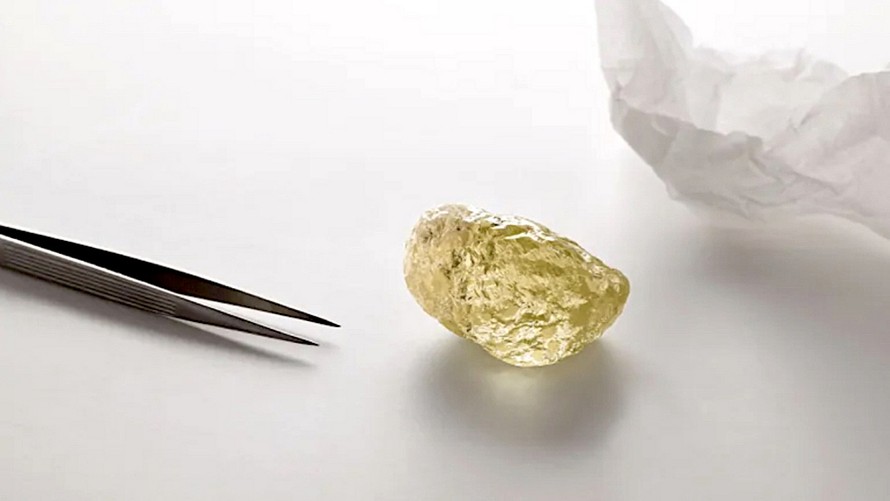 A yellow diamond weighing 552 carats, or about the size of a chicken egg, was unearthed in Canada’s arctic in October, believed to be the largest diamond ever found in North America, miners Dominion Diamond Mines and Rio Tinto RIO, -2.14%[1]   announced this week.

The gem-quality stone measures around 3 centimeters by 5.5 centimeters, almost three times the size of the next largest stone ever found in Canada, said Dominion, which owns 40% of the mine at Diavik, where the diamond was found.

“A diamond of this size is completely unexpected for this part of the world and marks a true milestone for diamond mining in North America...,” the company said in a release[2].

The previous record for a North American diamond was also found at Diavik, located in the Northwest Territories. At 187.7 carats, the so-called “Foxfire” 2-billion-year-old diamond was discovered in 2015.

The new diamond’s “color, texture and structure are also unique from a geological perspective and may be studied further,” Dominion said. “The size and highly technical nature of this stone means that only a handful of master cutters in the world are qualified to polish it, ensuring that the stone’s beauty, color and brilliance are maximized.”

Dominion, which was taken private by The Washington Cos. in 2017, said it expects to achieve a significant main stone once the diamond is polished. It will be Canadamark certified, the hallmark process that confirms Canadian origins, responsible mining, as well as quality.

Don’t miss: Why De Beers is growing diamonds in a lab[4]

The new discovery is one of the 30 largest diamonds ever found. The largest on record was the 3,106-carat Cullinan, found near Pretoria in South Africa in 1905, according to a report on Mining.com.

Read: How the ‘holy grail of shipwrecks’ was found — with $17 billion in booty[6]

Get a daily roundup of the top reads in personal finance delivered to your inbox. Subscribe to MarketWatch's free Personal Finance Daily newsletter. Sign up here.[7]...

More in this category: « The Bank Of England And The Manipulation Of Sterling The Supreme Court Judgement And Scotland's Colonial Status »