China slowdown will weigh on U.S. stocks in 2019: Barclays

Equities strategists at Barclays have lowered their price target for the S&P 500 index SPX, +0.67%[1]   to 2,750 from 3,000, after lowering the estimate for earnings-per-share growth and its expected price-to-earnings ratio for the benchmark index.

“Our bottom-up EPS projection for 2019 has seen a sharp decline since mid-November 2018,” Maneesh Deshpande, head of U.S. equity strategy for Barclay’s wrote, in a research note. “This is partially due to a overall decline in consensus earnings-per-share [projections] from 9.3% to 7.9%,” but largely due to a decline in the three-month change in the Conference Board’s leading economic indicators index, which Barclay’s strategists use to adjust consensus earnings-per-share growth estimates.

Barclay’s Research
Meanwhile, the bank has lowered its estimates for the price-to-earnings ratio for the S&P 500 from 17 times earnings to 16 times earnings, based on a deteriorating macroeconomic environment, due in large part to a slowing Chinese economy. “Although the U.S. economy looks relatively healthy, the outlook for non-U.S. global growth is turning more pessimistic,” Deshpande wrote, adding that in retrospect, non-U.S. economic growth peaked last January, while its upswing in 2017 was largely the result of Chinese government stimulus, aimed at countering the 2015-2016 economic slowdown. But because Chinese policy makers are concerned about imbalances in the Chinese economy, and potential bubbles in debt and property markets there, they will be unable to stimulate Chinese growth as aggressively as they did in 2017. “As part of their long-term goal of achieving a soft landing for the economy Chinese policy makers have pursued a delicate balance of alternating between slowing credit growth and then easing by providing various types of stimulus... the Chinese government is now again in the credit slowdown phase.”

Because the U.S. economy does not rely heavily on foreign trade to produce growth, the effect on the American economy of a Chinese slowdown should be limited, Deshpande argued. “However, the non-U.S. slowdown could have a significant impact on U.S. equities, which have material exposure to international markets. We see that 30% of total sales for the S&P 500 are derived from abroad while for the technology sector it is as high as 60%.”... 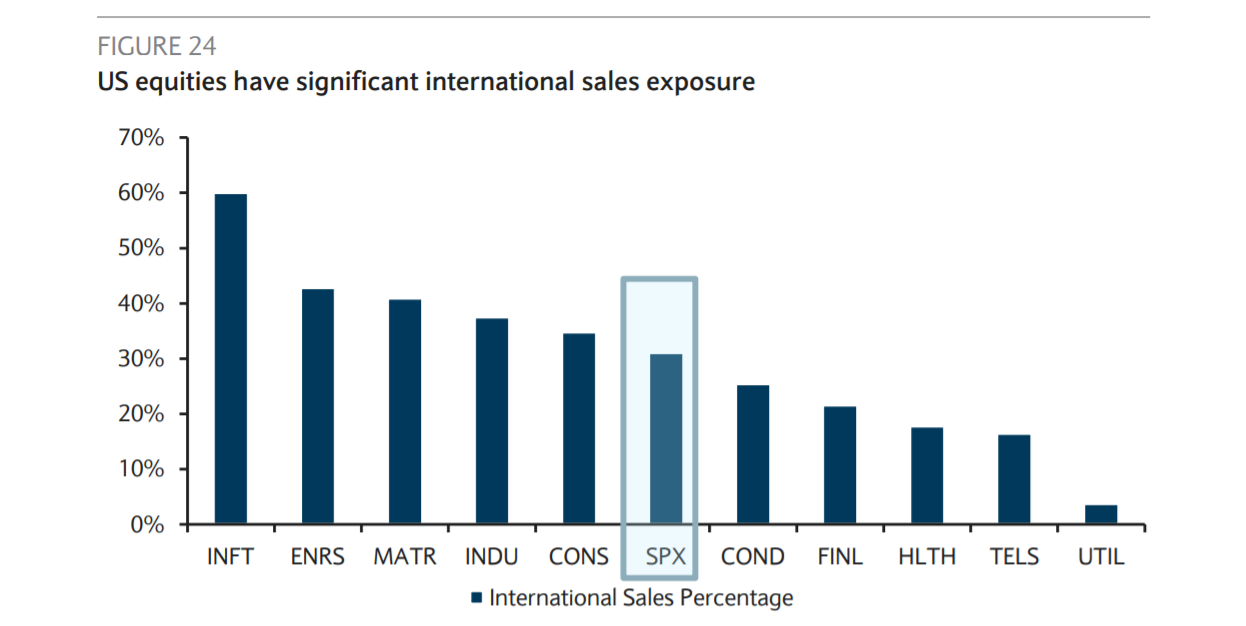 Barclays Research
Barclays strategists also pointed to increasingly negative sentiment, fund flows and poor market liquidity as reasons to reign in its estimates for the S&P 500 in 2019. While individual investor sentiment remained strong well into the market correction that began late last fall, that changed in December, when mutual fund flows turned significantly negative. “Retail interest in ‘recession’ and Fed rate hikes spiked in December based on Google searches for these terms,” Deshpande wrote, arguing that these trends

Read 344 times
Tweet
Published in Economics
More in this category: « Return Of The Bull Or Dead Cat Bounce? One Trader Warns, Beware Of 'Thawing' US-China Trade Tensions »
back to top