Every city's down town is different. Some function as commercial hubs where many travel to shop and work, but where few would want to live. In some cities, down town areas struggle with high crime rates following decades of urban flight that have left ramshackle buildings and dilapidated homes in their wake. 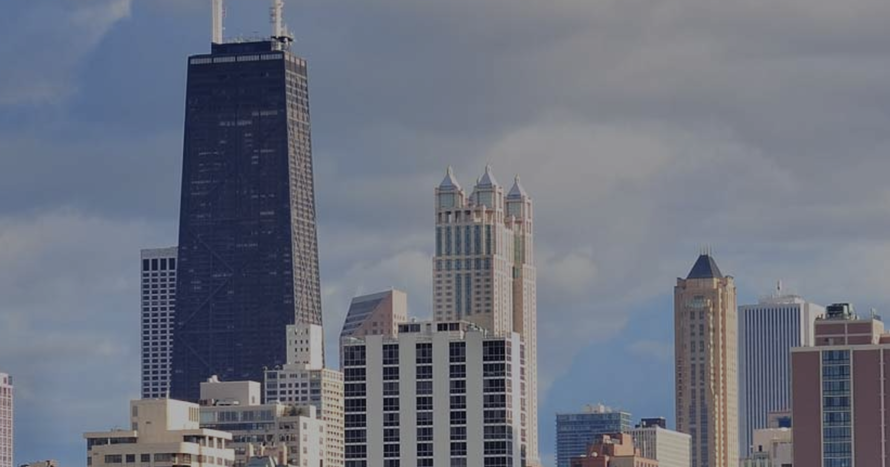 And just as the specific features of every urban center are different, the manner in which they recovered from the housing crisis has been different, too. And one way to explore these differences is too look at how real-estate prices in down town areas relative to the surrounding city. In a recent study, analysts at Property Shark examined the spread between the median home sale price in downtown areas vs. the city as a whole, which they described as a key indicator to measure the progress of gentrification as younger Americans continue to favor hip urban centers. Their analysis looked at a decades’ worth of home-price data in 34 of the largest  US cities, plus Manhattan and Brooklyn, to suss out just how much more expensive it is to live in a down town area. 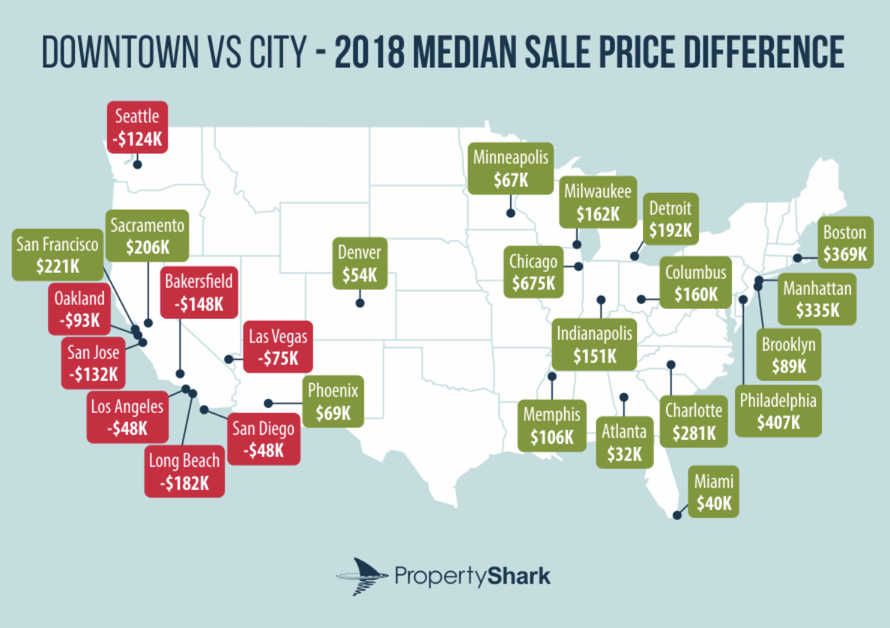 PropertyShark's analysts outlined four broad categories based on the change in the downtown-broader city home-price spread: There are cities like Charlotte, NC, where the spread has widened considerably since the crisis, cities like Minneapolis where the spread has been steadily decreasing, and cities like Las Vegas where living down town has consistently been cheaper than the surrounding area and cities like Boston and Chicago, where living down town has long been far pricier than finding a home in an outlying area.

While Manhattan has typically been the epicenter for pricey down town real estate, in 2018, Chicago emerged as the city with the widest gap between downtown media sales price and the broader city. 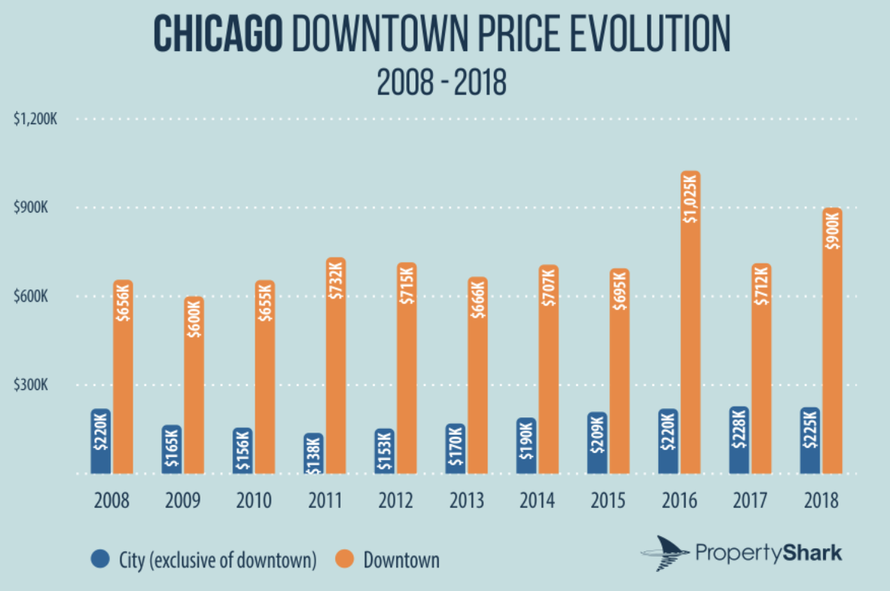 And while gentrification has pushed thousands of people out of their neighborhoods in New York City, elsewhere, the forces of gentrification have offered some welcome relief for homeowners. Take Detroit, where rapid price growth in downtown real estate in recent years has helped assist a revival of the city. 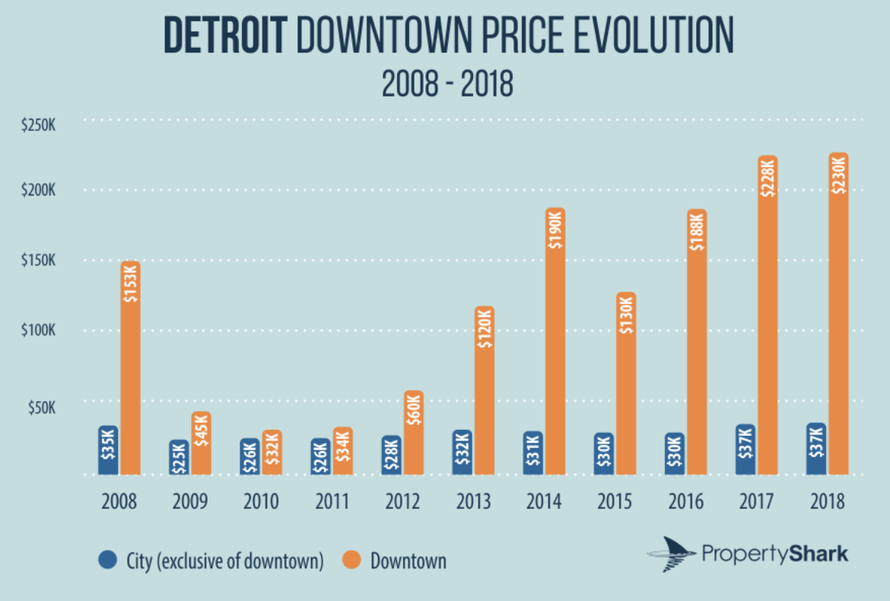 Interestingly enough, San Francisco, one of the priciest real-estate markets in the country, has seen the spread fluctuate wildly over the past ten years, sometimes by as much as $500,000 a year. 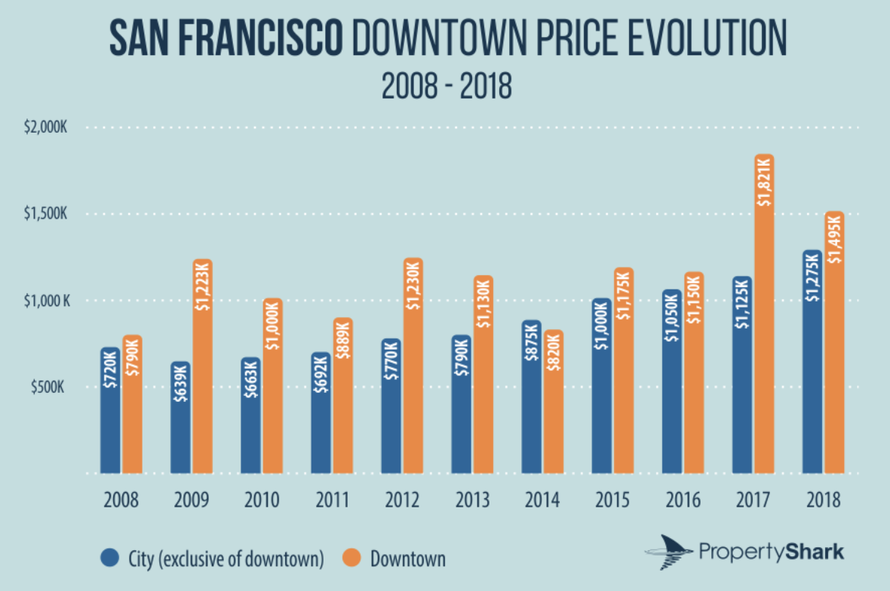 But outside of San Francisco, downtown real estate in California cities tends to be on the cheaper side, with Los Angeles the largest city in the country where down town real estate is cheaper than the surrounding area, largely because of exclusive celebrity packed...

More in this category: « A media reckoning — or one for Trump — after rare Mueller response to BuzzFeed Russia-probe leak? Why New York’s plan to legalize cannabis for adult recreational use is a big deal »