Alexandria Ocasio-Cortez's "Green New Deal" initiative was immediately met with a torrent of ridicule after its unveiling on Thursday, not just by climate change deniers but also by establishment Democrats like Nancy Pelosi, who dismissed it as a "green dream" and insisted that there were other, more practical, ways to fight climate change than banning cow farts and airplanes.

But in what's looking like a staggeringly haphazard rollout, the controversy over the plan continued on Friday when co-sponsor Ed Markey, the Massachusetts Senator who was the plan's lead backer in the Senate, slammed Ocasio-Cortez and the plan's "fact sheet" for calling for a ban on nuclear power, which supplies roughly 50% of America's carbon-free energy. 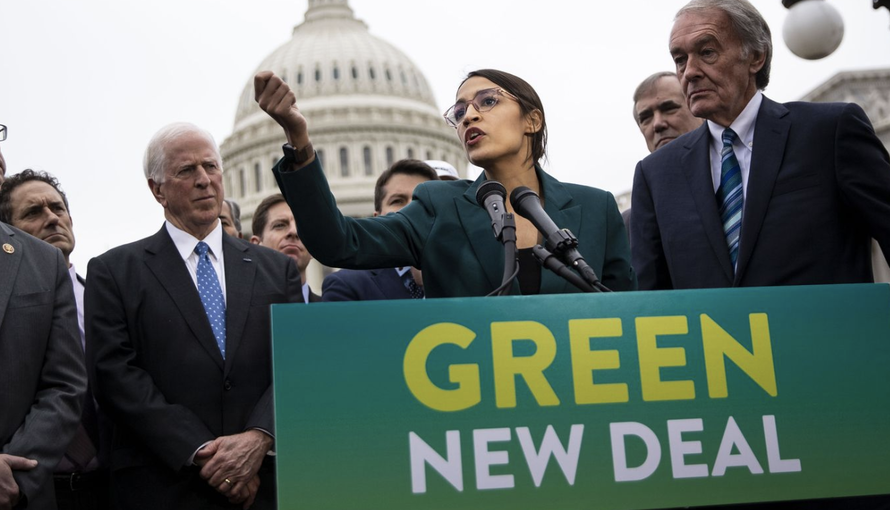 Giselle Barry, a spokeswoman for Senator Ed Markey, a Massachusetts Democrat who is the Green New Deal’s lead Senate backer, disowned the fact sheet and said Markey’s office wasn’t consulted before it was sent out. "We did not draft that fact sheet," she said.

Markey sought to do damage control at a midday press conference, emphasizing the proposed resolution doesn’t address specific energy technologies. Language on nuclear power “is not part of this legislation,” he said. “The resolution is silent on any individual technology that can move us to a solution.”

Not only did the nuclear power provision annoy potential supporters of the deal who see nuclear power as an essential component of any carbon-free energy infrastructure, it also revealed how difficult it might be to "build consensus" around such an extreme, radical collection of proposals. But that wasn't the only criticism of the plan lobbed by other green-energy advocates.

Many, including former Obama Administration Energy Secretary Ernest Moniz, argued that the goal of shifting the US economy to 100% renewable energy within 10 years simply wasn't realistic. And pursuing such an aggressive milestone would put too much pressure on important constituencies of the left like, for example, labor unions.

“I’m sure it has some co-sponsors scratching their heads,” said Jeff Navin, who served as acting chief of staff for Ernest Moniz, President Barack Obama’s energy secretary.

Moniz himself said that it may be impossible to achieve zero carbon emissions in 10 years, as the plan calls for.

"It’s just impracticable," Moniz told National Public Radio. "And what concerns me about that is if we start putting out impracticable targets we may lose a lot of key constituencies that we need to bring along."

He cited labor unions as an example.

"We cannot strand too many assets and frankly stand too many workers with impracticable unrealizable objectives," Moniz said. "We will jeopardize what I think has been the very significant movement of the large energy companies toward developing their new business models to function in a low carbon world."

More in this category: « All that money you spend on bad dates every year could pay one month’s rent Skechers shares soar as analysts weigh in on profit beat »