Just south of Tampa, Fla., students at the Manatee School for the Arts (MSA) roam the hallways past an armed combat veteran who is constantly looking out for threats. By the end of February, another one will be manning a guard shack at at the school's entrance.

39-year-old Harold Verdecia, a former infantryman in the US army who completed tours in Iraq and Afghanistan, patrols the hallways of Manatee strapped with a 9mm Glock 19X and a Kel-Tec "Bullpup" rifle, according to the Herald Tribune.

Verdecia isn’t there to get to know the kids, break up fights or do the typical community-policing that school resource officers typically do, said MSA Principal Bill Jones.

Verdecia has one job: Stop an active shooter. -Herald Tribune

"When seconds count, (Palmetto police) are only a few minutes away," says Principal Jones - who has gamed out the nightmare school shooter scenario in exacting detail. He's also justified Verdecia's use of a semi-automatic rifle instead of just a handgun.

"We’re not looking for a fair fight," Jones said in an interview cited by the New York Times. "We’re looking at an overwhelming advantage." 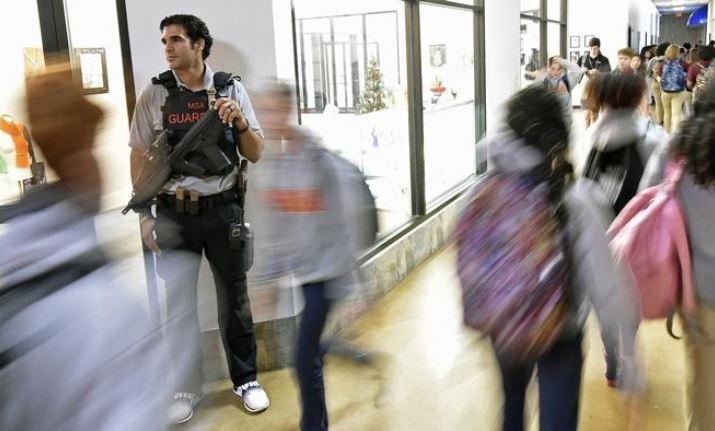 With a shooter just 100 feet away, there aren't many officers who could take the suspect down with a handgun, according to Jones. With a rifle, however, Verdecia could make that shot with hollow-point bullets designed to flower on impact and shred the shooter's internal organs instead of exiting his body and hitting someone else.

In order to become a guardian, Verdercia completed the 144-hour training course that the Manatee County Sheriff’s Office ran for the school district, plus additional training to be qualified to carry the rifle. District general counsel Mitch Teitelbaum said while school district guardians are trained using 9-millimeter Glocks, charter schools have the freedom to arm their guardians with other weapons.

Despite his status as perhaps the most lethal guardian in Manatee County, Verdecia is soft spoken and quietly dedicated to his task. He estimated he walks 9 miles a day, patrolling the vast campus.

Jones said Verdecia earns more than $50,000 a year, plus benefits, to protect the more than 2,000 students at MSA. He is hoping to hire another guardian soon, and Jones was reviewing applications in his office on Thursday. -Herald Tribune

To protect himself from incoming fire, Verdecia wears body armor.

To hire Verdecia and his new co-worker, MSA took advantage of a law passed by Florida lawmakers in the wake of last February's shooting at Marjorie Stoneman Douglas High School requiring all schools to have armed security. Most districts achieved this through a combination of school resource officers and guardians - and most just carry handguns, according to the Herald Tribune. Principal Jones justifies the decision to arm Verdecia with a rifle. "It’s just a much more effective weapon than the handgun...