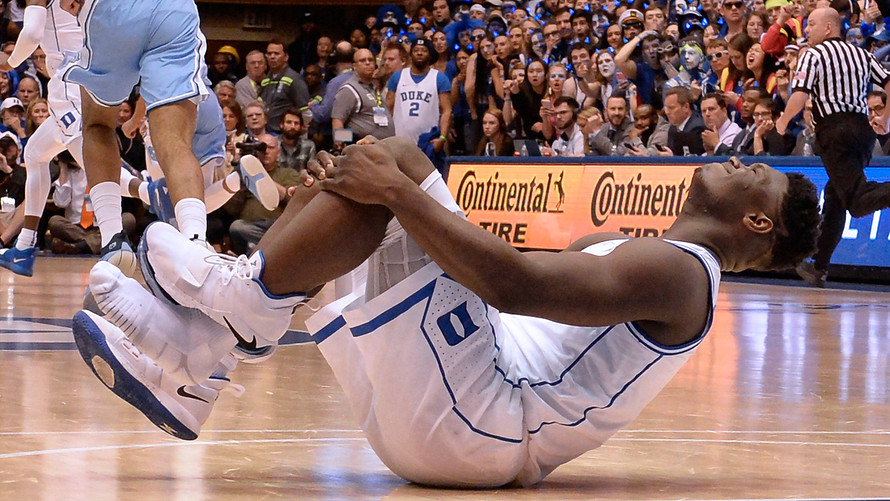 Duke star basketball player Zion Williamson suffered a knee injury[1] during Wednesday night’s game against rival the University of North Carolina after one of his Nike NKE, -1.33%[2] shoes ripped open, causing him to fall and twist his knee. Duke coach Mike Krzyzewski called it a mild knee strain[3] after the game, but the severity of the injury is unclear.

Williamson, an 18-year-old freshman, is the presumptive No. 1 pick in this year’s NBA draft, and one of the best basketball prospects since LeBron James. He is 6’ 7”, averages 21.6 points a game, and his thunderous dunks are frequently featured on ESPN.

It’s unknown if an injury will keep him from playing another college basketball game — or if he will decide not to play again to prevent further injuries before the NBA draft. But if Williamson misses a significant amount of time, it could cause him to be drafted lower than No. 1 and impact his potential earnings.

If you’re still not convinced that Williamson could slip past the top pick, there is some precedent. In 2014, Joel Embiid was considered by many to be the future first overall pick[4] in the upcoming NBA draft. He slipped to pick No. 3 after he struggled with back and knee injuries that February. Perhaps there wasn’t quite as much hype on Embiid in 2014 as there is on Williamson in 2019, but it’s a comparison worth mentioning.

Another area where Williamson could possibly lose out on future earnings is if he decides to sue Nike It’s unclear if there is any legal action[5] that he could or would take, but suing the top basketball shoe brand could cost Williamson money down the road if he burns bridges at the swoosh, which typically pays players more than other sponsors. Nike pays Duke to provide its sports teams with apparel and footwear.

In the unlikely event that the injury is catastrophic, Duke reportedly bought an insurance policy[6] worth $8 million for him. Such a policy would only trigger if he slips past No. 16 in the draft, which is also unlikely....

More in this category: « Shocking Philly Fed Collapse: Biggest Drop Since 2011 US Rating Downgrade Rabobank: Are Commentators Still Under The Illusion China Has A Market-Based Financial System »