The Dow theory on stock price movement is a form of technical analysis that includes some aspects of sector rotation. The theory was derived from 255 Wall Street Journal editorials written by Charles H. Dow (1851–1902), journalist, founder and first editor of The Wall Street Journal and co-founder of Dow Jones and Company. Following Dow’s death, William Peter Hamilton, Robert Rhea and E. George Schaefer organized and collectively represented Dow theory, based on Dow’s editorials. Dow himself never used the term Dow theory nor presented it as a trading system.  – Wikipedia

We constantly monitor the Dow Transports Index and its relative performance as a signal of future equity price action.  There is a growing concern that the Trannies have been underperforming other indices, including its father, the Dow Jones Industrials, since Valentine’s Day.

The concerns are reinforced by the signals the deterioration in the TRP sent in 2018 just before last year’s three major corrections.   The table and chart below should not be viewed in isolation from one another but as compliments. 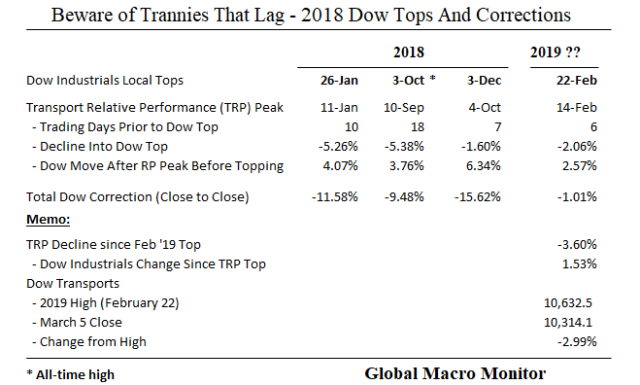 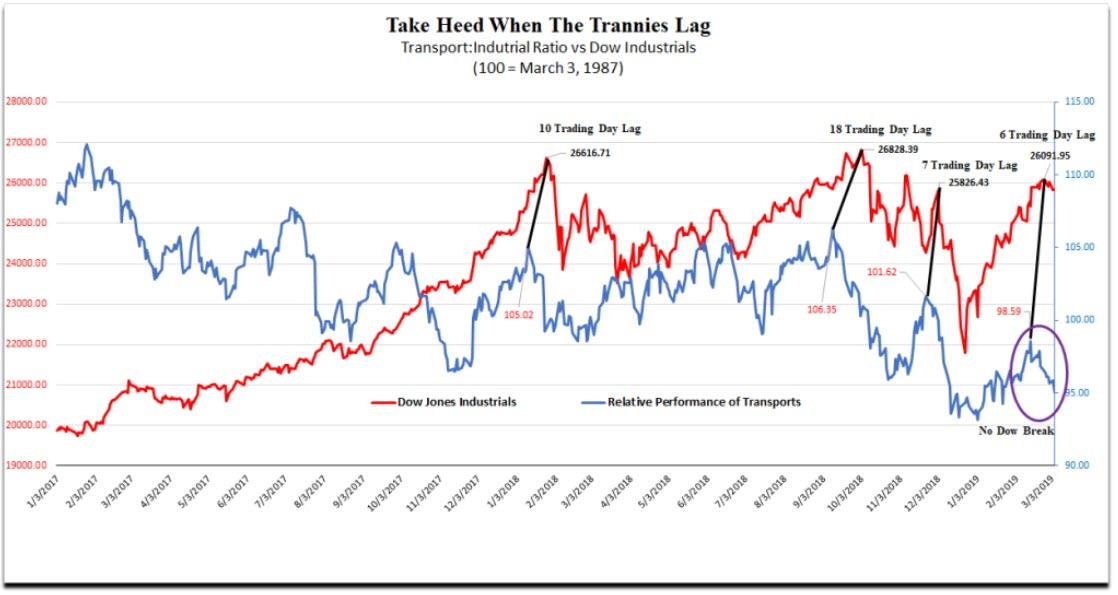 The relative performance of the Transports or the TRP (Transport/Industrials) peaked 10 trading days before the Dow’s high on January 26th, declining by more 5 percent before the Dow and stock market rolled over and experiencing a historic spike in volatility.

Only three times since 1950 has intraday volatility jumped so high as measured by a modified version of the Average True Range:  1) September 1955 after an extraordinarily period of calm the S&P500 tanked on September 26th when markets opened after President Eisenhower’s heart attack on the 8th hole of Cherry Hills Country Club over the weekend. The market quickly recovered; 2) January 1962 when the “Kennedy slide” began to accelerate; and 3) the October 1987 stock market crash.  – GMM, February 11th

The first correction of 2018, close-to-close in the Dow Industrials, was 11.58 percent.

After spending most of the year recovering and making new all-time highs into the end of Q3,  the Dow and stock market...

More in this category: « CFO of one of Italy’s largest banks says better capitalized lenders should offset ‘doom loop’ fear For once, oil isn’t to blame for the surge in the trade deficit »