While Mario Draghi continues to lament the lack of inflation that the ECB's massive balance sheet - now at 41% of Europe's GDP -  has failed to spark, and is contemplating even more aggressive measure to create higher prices, to one group of people, the ECB's reflationary efforts have been more than successful: Berlin renters who are furious that the median rent has more than doubled since 2011, soaring past 10 euros a square meter, meaning a 1,000-square-foot apartment costs more than $1,100 a month (still be a bargain in most other major cities), 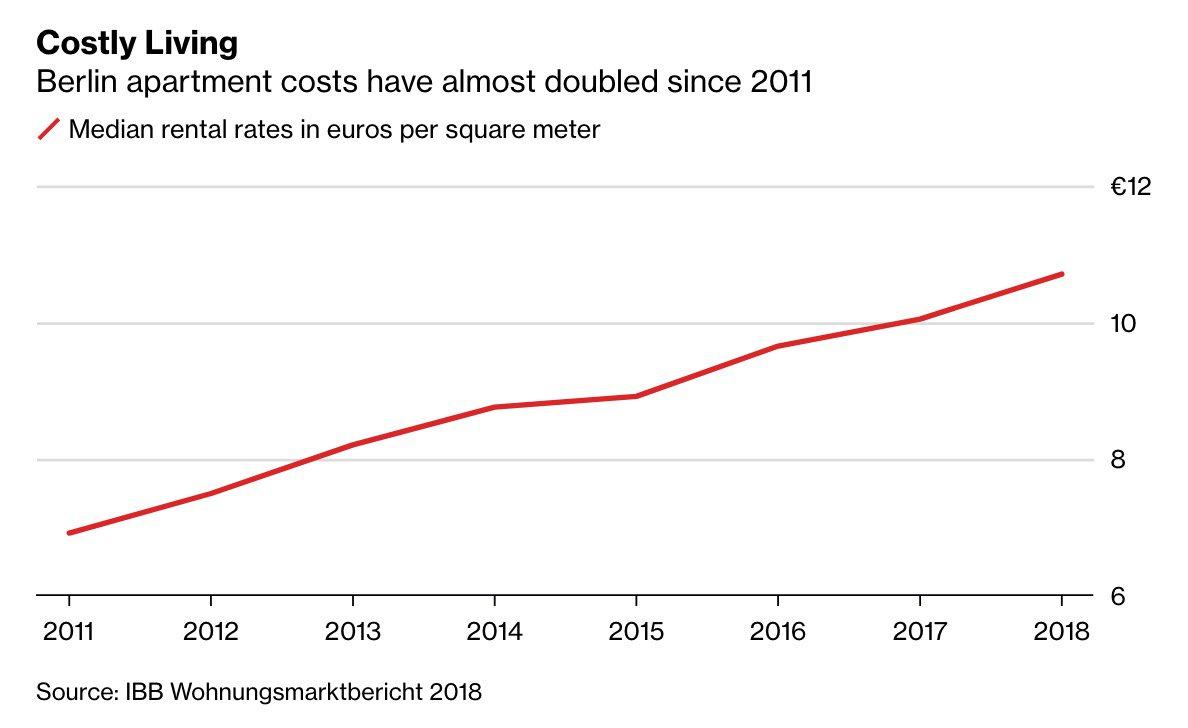 And as the anger over soaring rents grows, so do the protests: last weekend, 50,000 protesters took part in a march against rent increases in Germany's capital city, which was organized by an affordable housing advocacy group in an effort to collect signatures for a referendum that would push the city to expropriate apartments from large landlords, and transfer some of the city's increasingly expensive residential rental properties to public ownership.

If the group gathers enough signatures — about 20,000 — the city's government will have to consider a plan to seize more than 250,000 apartments from their corporate owners, The Associated Press reported.

The proposal targets for-profit companies that own more than 3,000 apartments in Berlin: "These are companies that are coming in and seeing a really profitable market," Thomas McGath, a spokesperson for the group that organized the campaign, told NPR. "It's not your normal mom and pop landlord."

In other words, far from not sparking inflation, the ECB has not only doubled Berlin rents, but sparked a historic backlash that may result in the confiscation and the nationalization of big, corporate chunks of the housing market.

And here's where it gets especially troubling for the ECB: under German law, the plan technically could happen. As NPR reports, Article 15 of the German Constitution states that "land, natural resources and means of production may, for the purpose of nationalisation, be transferred to public ownership."

Furthermore, while Germany has the lowest proportion of home owners in the European Union, renters are by far in the majority in Berlin. That makes rental costs a political issue. Merkel’s government has taken tentative steps by passing legislation to limit rent increases and pledging to invest more than 6 billion euros in affordable housing.

Ah the irony: East Germany, in its passionate desire to "tear down this wall", never really considered the long-term consequences of a free market (even if one manipulated entirely by the ECB), and is suddenly feeling nostaglic for the good, old days of communism, where things such as private property did not exist.

"At the beginning, some of the fathers of the constitution thought, 'Well, there...

More in this category: « Global policy makers say they’re willing to ‘shore up growth’ to avoid world slowdown Donald Trump: The stock market should be as much as 10,000 points higher »