A ‘tired’ stock market is a reason for caution, says chart watcher

Do stock-market bulls need a timeout? Or even a nap?

In a Thursday note, George Davis, chief technical strategist at RBC Capital Markets, argued that the rally that’s seen the S&P 500 SPX, +0.16%[1]  roar back from the verge of a bear market to the cusp of record territory in less than four months has left the stock market looking “tired.” The setup at least argues for some caution in the near term, he said. Here’s his candlestick chart, below:... 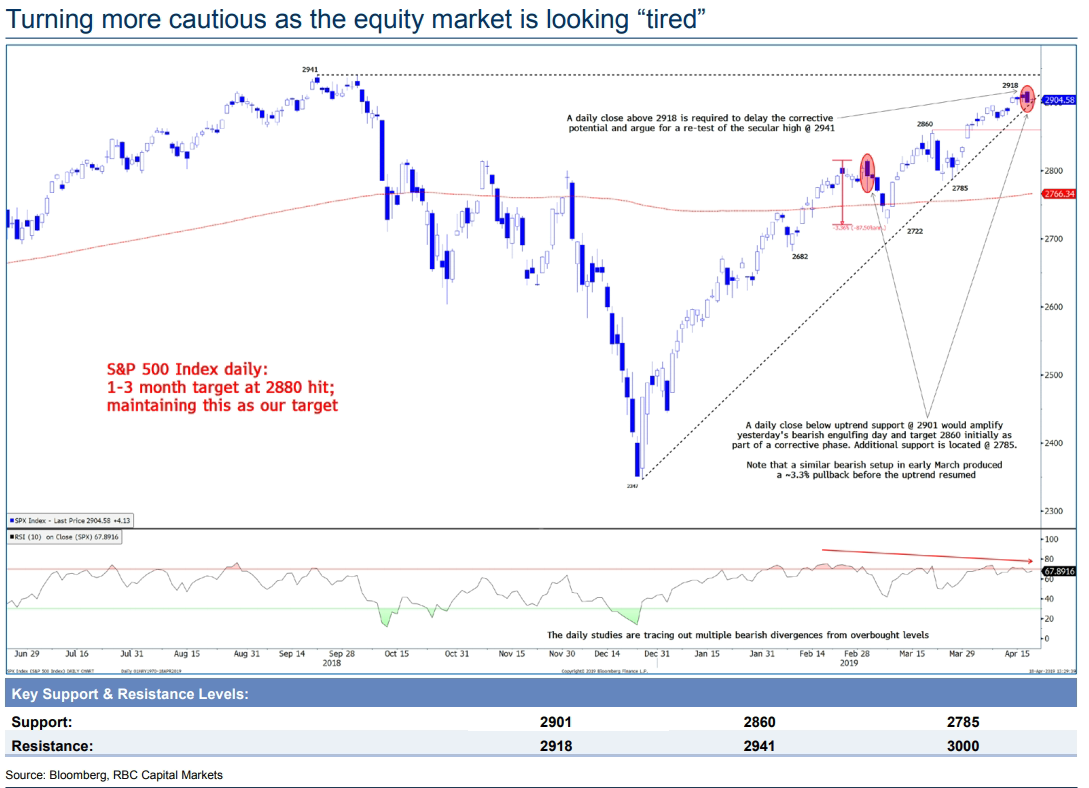 RBC Capital Markets
“We are turning more cautious on equity markets as the SPX nears its secular highs as valuations are becoming a more pressing concern,” Davis wrote, referring to the ticker for the S&P 500 index. Thursday’s gains[2], however, might buy some time. The S&P 500 ended with a gain of around 5 points, or 0.2%, near 2,905. Davis said a daily close above 2,900 could “delay the corrective potential and argue for a retest of the secular [intraday] high at 2,941” set on Sept. 21. Meanwhile, a daily close below uptrend support at 2,901 would leave 2,860 as an initial target “as part of a corrective phase,” with the next layer of support seen at 2,785. A similar setup in early March saw a 3.3% pullback before the uptrend resumed, he said. After notching an all-time closing high at 2,930.75 on Sept. 20, a fourth-quarter selloff pushed the benchmark large-cap index deep into correction territory but stopped just short of a bear market — popularly defined as a fall of 20% from a peak. In a V-shaped rebound, the index through Wednesday was up 24% from its Christmas Eve low, and sat just 1% away from its Sept. 20 high. The Dow Jones Industrial Average DJIA, +0.42%[3]  saw similar action and was up more than 21% from its Dec. 24 low and stood just 1.4% away from its record close of 26,828.39 set on Oct. 3. While fund-flow data and sentiment surveys show investors have warmed up to the market as it’s continued its rally, they’ve yet to swarm in. Citing a glut of uninvested cash, Larry Fink, the chief executive of BlackRock Inc. BLK, -0.39%[4] the world’s largest asset manager, warned earlier this week that a “melt-up” was a more likely near-term scenario than a “meltdown.” See: Stock market at ‘risk of a melt-up, not a meltdown,’ warns BlackRock’s Larry Fink[5] Also read: Dow, S&P