The year-to-date rally in global risk assets after the Fed flip appears to us to be a last gasp of speculative mania for the current economic cycle.

We believe that the first two storylines are simply wrong. We show why herein.

Regarding the third, in our view, China is much more likely to tank the world economy over the next several quarters than rescue it given the historic credit imbalances there, which we also explain below.

Central Banks Do Not Have Your Back

There has been a huge misconception that global central bank liquidity is what is driving stock prices up today. Our work shows that both global M2 money supply and central bank assets have been contracting on a year-over-year basis so far in 2019. That tells us liquidity has not been the driver of the current market-top-retest rally; hope has been.

But even when global QE returns, it is likely to be no saving grace. As shown above, starting in September 2006 led by China, global central banks increased their balance sheets by $3.9 trillion or more than 50% through March of 2009. This unprecedented level of money printing did not prevent the Global Financial Crisis. Rather it preceded and accompanied it.

Even the Fed’s QE1 which started in 2008 did not stop stocks from plunging; it only coincided with it as shown below. 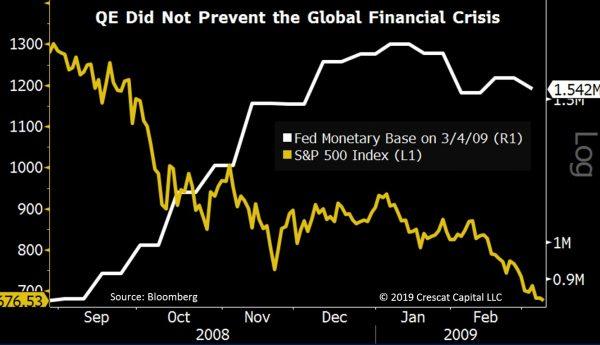 The same goes for the Fed’s past changes in interest rate regimes from hiking to easing which are much more often bearish than bullish for stocks. As we show in the chart below, there were twelve times since 1954 (the history of the Fed Funds) that the US central bank paused its interest rate hiking cycle and then reversed it. Only three of those reversals ended in soft landings (1966, 1984, and 1995). In contrast, nine were associated with stock market downturns that led to recessions. We believe the three soft landings were possible because they occurred early in the business cycle, an average of only three years into the expansion. The Fed’s December 2018 hike followed by a pause, on the other hand, occurred a record 9 1/2 years into the economic expansion, exceeding the last hike at the peak of the tech bubble by one quarter! Of the nine pauses associated with market downturns and recessions, the economic contraction began an average of just five months from the date of the last rate hike....

More in this category: « Rudy Giuliani: There’s ‘nothing wrong’ with getting dirt from the Russians Beyond Meat is going public: 5 things to know about the plant-based meat maker »