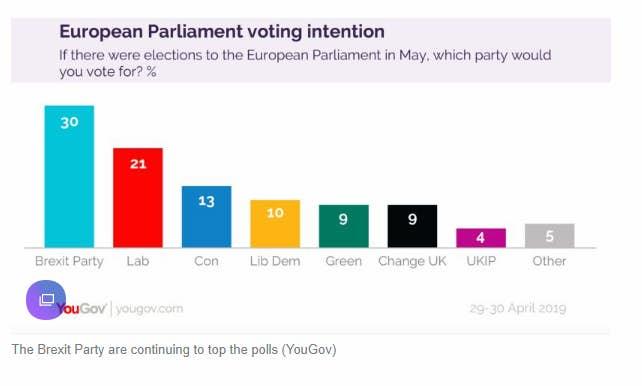 The Brexit Party Continues to Surge in the polls for the European elections as Change UK fall behind Lib Dems.

2,000+ turned out in Newport for the Brexit Party.
“This wasn't like party conferences, there was noise, excitement, and the number of selfies and pictures should show the regard supporters hold their candidates in.” https://t.co/xrWPflfql1

The above table represents the official party position. Most Tories (Conservative) do not favor Theresa May's pathetically negotiated withdrawal agreement.

Many in the Labour party favor remaining, a referendum, or even leaving.

Both the Tories and Labour splintered mightily over Brexit but Labour fared better, at least for now.

Change UK is a group of pro-Remain misfits of former Tories and former Labour who left their parties in disputes over Brexit.

They have little in common other than a foolish desire to remain in the EU.

In the next UK general election, most of the Change UK supporters will be voted out of office.

Unless the EU makes a special deal, a customs union would limit the UK's ability to make trade treaties on it own, tie the UK to many inane EU policies, make the UK pay fees for single market access and give give the UK no say in EU policies.

It's crazy to back such a state of affairs, but that is the official Labour position....