It's been a while since we updated on the daily doings of the "world-renowned commodity guru" Dennis Gartman for the simple reason that just like the algos, the mom and pops and virtually all hedge funds, Gartman too had no idea what is really going on in a market in which everyone is selling (there is now $135 billion in equity fund redemptions YTD) yet stocks keep rising higher.

That changed this morning when the author of the Gartman Letter finally made an "official recommendation"... one which the bears may find troubling. To wit:

The CNN Fear and Greed Index closed at 39 last evening compared to its most recent low of 32 on Tuesday. Having risen to and just above 70 several weeks ago, the fact that it has broken down through the mid-50’s and is now at 39 is bearish… and we think, very… of equities generally. Strength… as we said Tuesday, Wednesday, Thursday and Friday of last week… as we said here yesterday and as we are saying here again this morning…is to be sold into; weakness is not to be bought and certainly it is not to be bought until the CNN Fear & Greed Index has fallen to below 20 and then turns upward. We are already short of the market in a trade where we are long of “commodities” and short of equities but more needs to be done and shall be.

Also, we draw attention to the chart of the S&P futures at the lower left of p.1 noting very clearly that as that market has risen for the past three trading sessions the volume was and is demonstrably smaller than was the volume as prices fell in the first week and one half of this month. Bull markets survive and extend on rising volume; markets that are rising on lesser volume have to be views as being suspect. 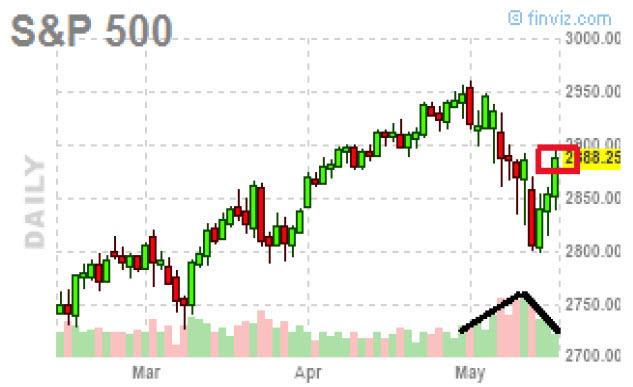 Finally, as noted in the comments attached to the chart in question, the rally of the past three days has taken the S&P back into what we have always referred to as “The Box” that marks the 50-62% retracement of the break that began on May 1st. This has our interest and indeed it has our interest sufficiently enough to finally make an official recommendation to sell stocks short this morning. Heretofore, as noted just above, we’ve been short of stocks against commodities on the long side, but on this rally, we are going net outright short for the first time in quite some long while.

Finally, for those who are asking...

Regarding our retirement account we have maintained our net short position in the equity market as we held to our short derivatives position which we put in place two weeks ago, although following the President’s comments on delaying the tariffs on autos Wednesday we cut the short position back by...

More in this category: « Here’s the background to Conrad Black’s conviction for fraud, obstruction Arianna Huffington: ‘I’m a risk-taker in every part of my life — except my finances’ »