One day after James Bullard opened the door for the "patient" Fed to start cutting rates and sending yields and the dollar sliding, moments ago the Fed Chair doubled down on dovishness when in opening remarks delivered to the Chicago Fed, Powell confirmed the Fed's openness to cut interest rates if necessary, stating that the Fed's unconventional tools are now conventonial and will "likely be needed in some form in the future" as he pledged to keep a close watch on the escalating trade war between the US and some of the world's largest economies.

Sparking a renewed dovish kneejerk reaction was Powell's flashing red headline that the Fed will "act as appropriate" to sustain the expansion, while affirming the the Fed is closely monitoring implications of trade negotiations for the US economic outlook as the Fed does not know how or when trade issues will be resolved.

“We are closely monitoring the implications of these developments for the U.S. economic outlook and, as always, we will act as appropriate to sustain the expansion, with a strong labor market and inflation near our symmetric 2% objective,” Powell said in Chicago.

In a surprising twist, Powell said that with the economy growing, unempolyment low and inflation stable "it's time to rethink long-run strategies." Powell also hinted that both QE and ZIRP, and perhaps NIRP are on deck, stating that interest rates so close to zero "has become the preeminent monetary policy challenge of our time," and admitting that "perhaps it is time to retire the term 'unconventional' when referring to tools that were used in the crisis. We know that tools like these are likely to be needed in some form" in the future."

Translation: not only is the Fed ready to cut rates, but it may take "unconventional" tools during the next recession, i.e., NIRP and even more QE.

Referring to “trade negotiations and other matters,” the Fed Chair said that “we do not know how or when these issues will be resolved."

As Bloomberg notes, Powell’s speech was dedicated to the Fed’s yearlong goal of reviewing its monetary policy strategies, tools and communication practices. “With the economy growing, unemployment low, and inflation low and stable, this is the right time to engage the public broadly on these topics."

Powell, however quickly reversed the market sentiment, and his clearly dovish turn sent both the dollar... 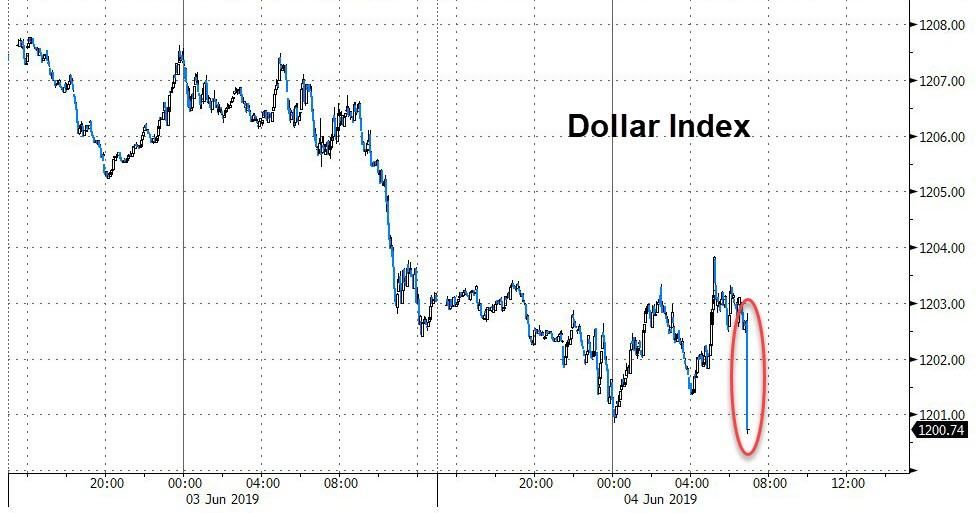 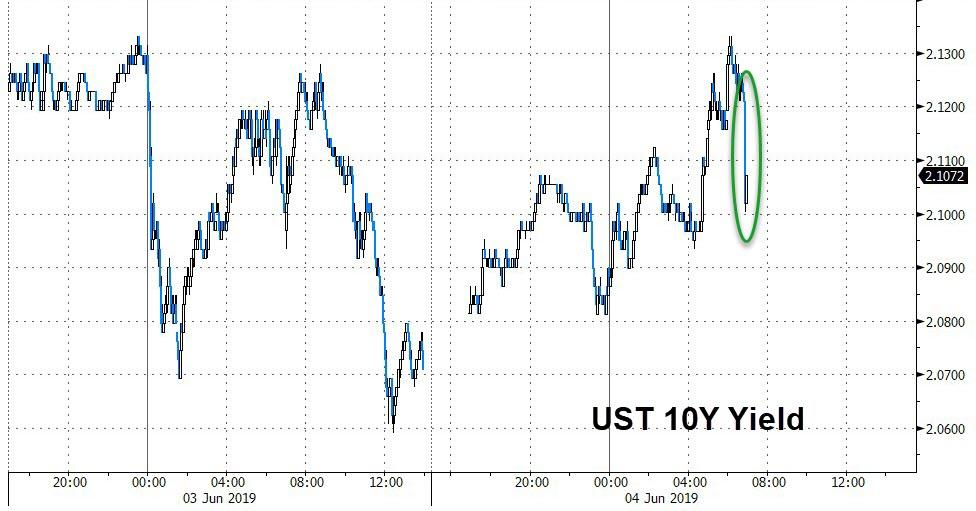 ... before both rebounded to pre-comment levels in a kneejerk reaction which we doubt will be sustained....