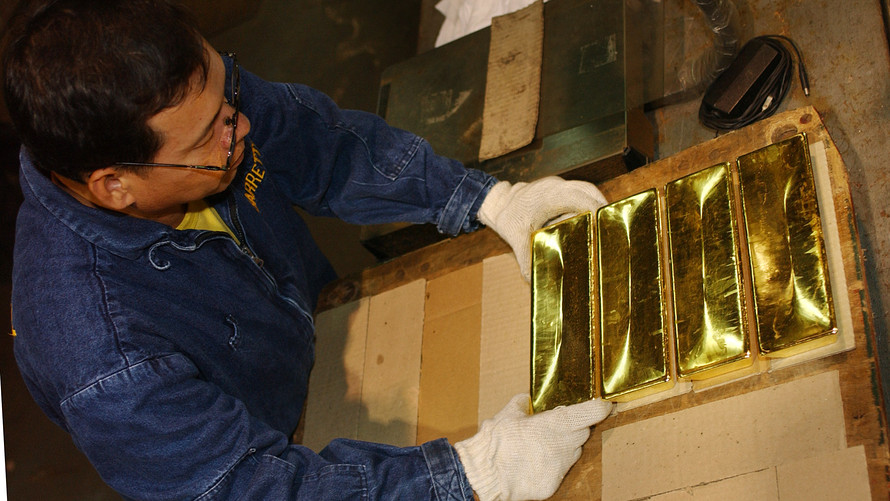 Gold prices advanced Thursday, on track to notch a third straight session gain, as demand for the metal rose on expectations for an interest-rate cut by the Federal Reserve this summer.

Nagging trade tensions between the world’s top two economies and intensifying Middle East unease also lured investors into the haven asset, analysts said. U.S. stocks climbed Thursday as gold futures settled[1] after back-to-back losses and oil prices surged[2] after two oil tankers were reportedly attacked in the Gulf of Oman, leaving one with a damaged hull and the other on fire and adrift.

“While the Fed might not be moving toward a ‘July’ rate cut, enough analysts in the marketplace are predicting the Fed is moving to cut and that underpins gold and silver prices above the June lows,” said analysts at Zaner Metals.

Save for Monday’s retreat, which was strong enough to leave the metal slightly lower on the week, gold has gained almost uninterruptedly for two weeks. The metal is inversely following a lower U.S. dollar DXY, -0.01%[5] The soft buck can be a tailwind for commodities priced in the unit as it makes them less expensive to users of other currencies, and vice versa.

Gold has benefited from a sharp slide in U.S. Treasury yields TMUBMUSD10Y, -1.47%[6] as investors increasingly bet the Fed will move later this year to cut interest rates, a prediction they believe was supported by a soft inflation reading in Wednesday data[7]. Lower yields can be a positive for gold, reducing the opportunity cost of holding the metal.

In addition to a safety bid, “the yellow metal is in line for even steeper gains and could attempt to break above $1,350 should the Fed next week signal that rate cuts are on the way,” said Raffi Boyadjian, strategist with broker XM.

Global political and market volatility also kept a floor in for the haven asset.

The Associated Press and other media outlets...