They’re right. It IS different this time. It’s worse. Much, much worse. What is? Everything. 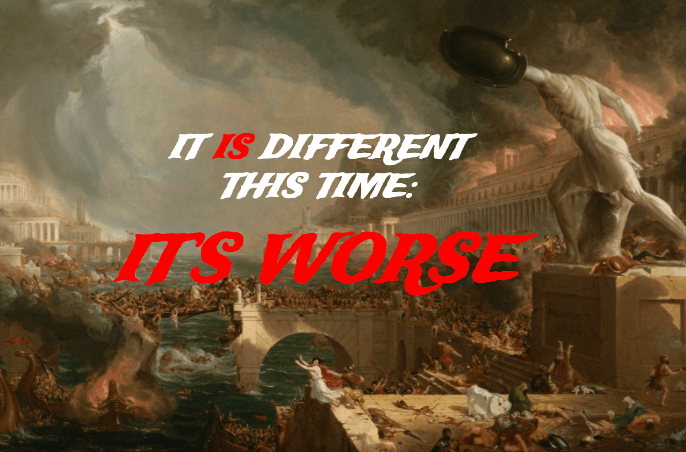 In terms of preparedness for the next recession that is. Debt is higher than ever, be it corporate debt, government debt, central banks balance sheets, available ammunition to deal with a new recession, wealth inequality, the social divisions and political extremes, and now trillion dollar deficits, everything points to a much more fragile system. Oh yes on paper low rates keep it all afloat, but the context is as ugly as it gets.

Here we are, the great collapse unfolding in front of us. With yesterday’s Fed meeting we witnessed a confirmed breakdown in central bank narratives over last the year, an utter capitulation to market realities that are forcing central banks to commence the new easing cycle. No, this is not a temporary little rate cut event they are promising, it’s a new cycle. The Fed yesterday offered a 3 rate cut outlook, precisely what markets had been pricing in. The Fed bowing before market demands. Give us drugs. Yes, whatever you want, you got it.

The response: An overnight collapse in yields to now below 2% on the 10 year, the lowest reading since the US election in 2016.

It was all bullshit: 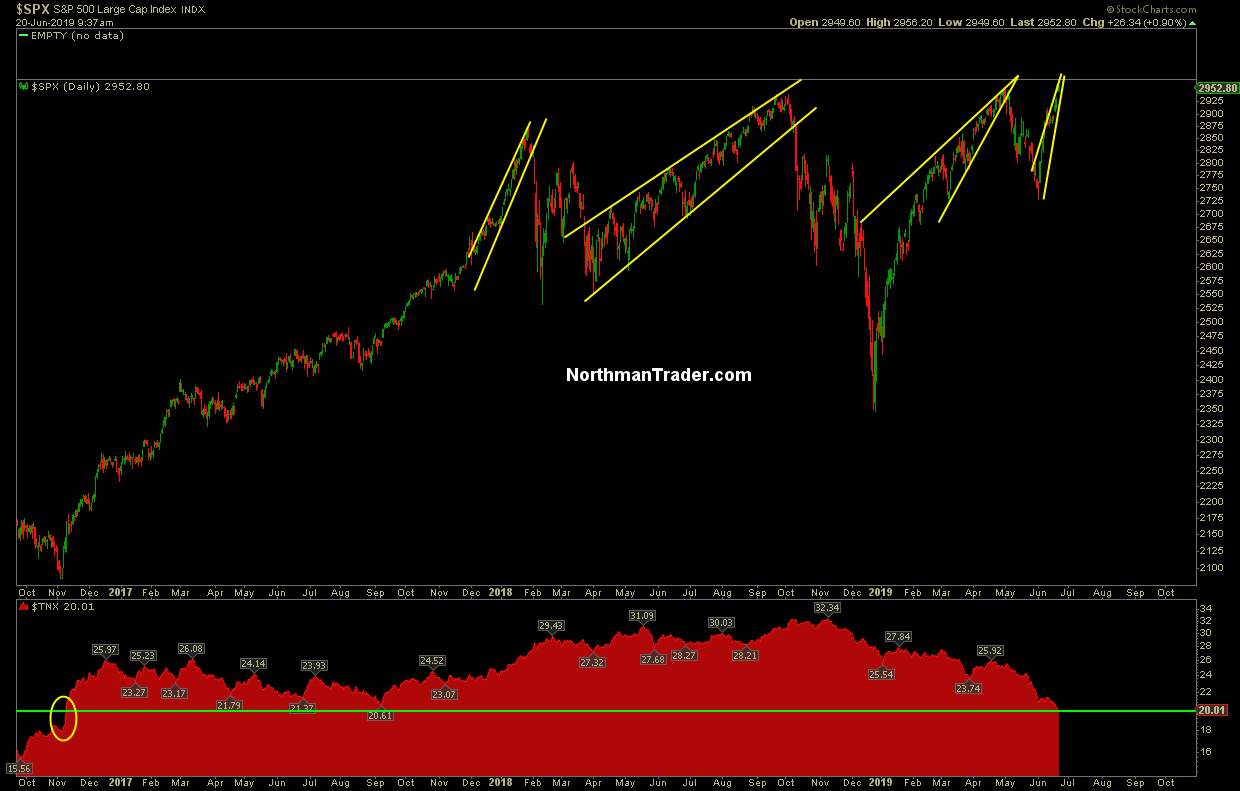 The glorious growth stories everybody told, the tax cuts that were supposed to bring greatness, all nonsense. Instead we’re now stuck with trillion dollar deficits, collapsing yields, and a renewed TINA effect as money doesn’t know where to go but stocks, chasing whatever they need to chase.

Or, if you don’t want to chase, you can lend money and pay people to borrow from you. It’s all the rage: 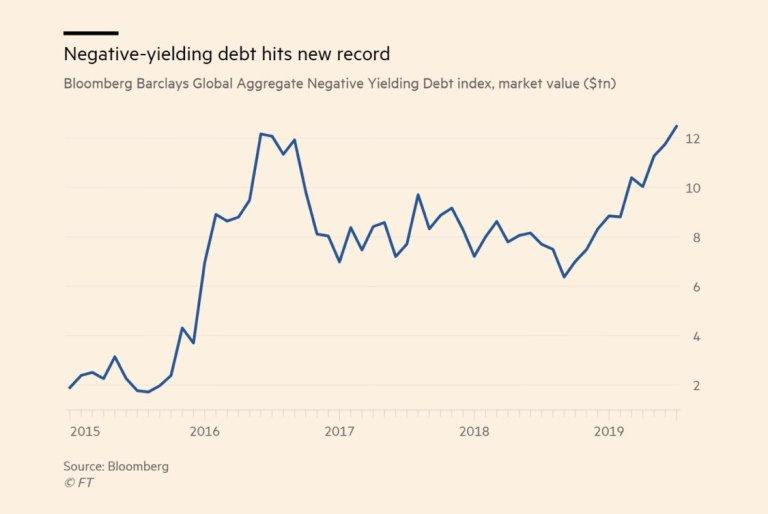 Over $12 trillion of negative yielding debt floating about there. Quite the recovery.

But be clear the bond market is screaming recession is coming, none of this is fundamental based:

It’s central bank driven, desperate to prevent what happened during the past cycles when dropping yields marked tops in cycles: 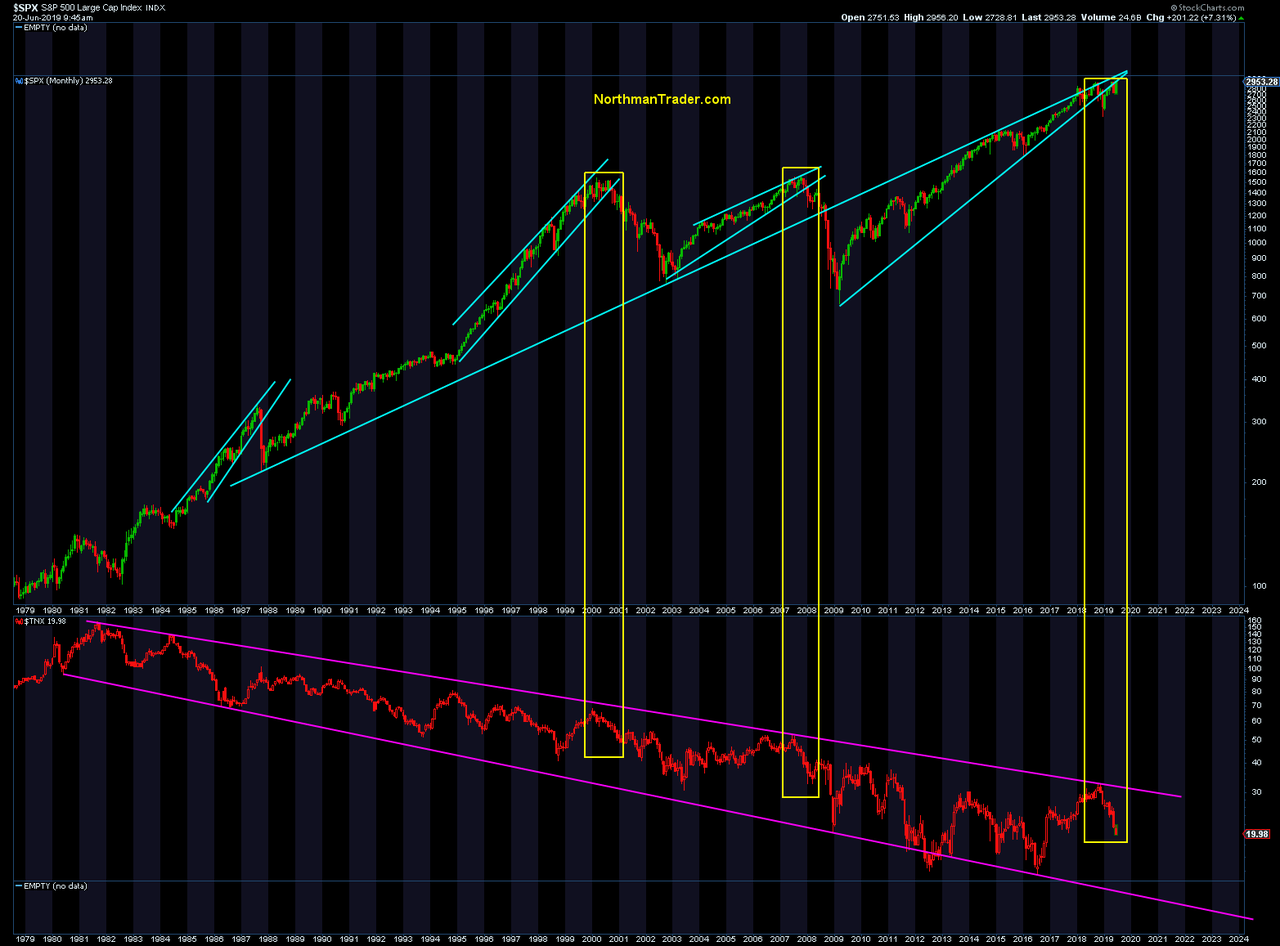 You know things are bad when a FRED chart goes viral:

Fun historic fact:
Every single time the Fed cut rates when unemployment was below 4% a recession immediately ensued & unemployment shot to 6%-7%.
Again: Every. single. time. pic.twitter.com/OyV8lNkRwz

Why is it going viral? Because it’s true. We’re at 3.6% unemployment with a 105% debt to GDP ratio and the Fed is signaling 3 rate cuts. The track record is clear, it’s not good news for the economy and ultimately not good news for stocks either.

If you are arguing that rate cuts are good for stocks you’re willfully ignoring this:

More in this category: « How a marijuana-software company became the first of its kind to list its stock on Nasdaq Want a pension in retirement? Here’s how to create one »