The Internet Party One citizen... one vote... zero government interference.
updated 10:50 PM, Aug 1, 2021 UTC
Headlines:
House poses obstacle to passage of infrastructure bi: A 2,700-page bipartisan infrastructure bill was headed to Senate desks Sunday with
McCarthy jokes it'll be hard not to 'hit' Pelosi wit: House Minority Leader Kevin McCarthy (R-Calif.) joked over the weekend that it wou
COVID-19 Delta variant up hospitalizations, deaths b: U.S. hospitalizations for COVID-19 are averaging nearly 35,000, a whopping 46% inc
NewsWatch: Nasdaq 15,000 is near. Do I hear 30,000?: How the Nasdaq Composite could eclipse the Dow in points in 10 years. ...Read mor
Senate infrastructure talks spill over into rare Sun: The Senate is poised to hold a rare Sunday session as a bipartisan group of lawmak
There's Now An Anti-ARKK ETF: There's Now An Anti-ARKK ETF There's now a convenient way to bet against everyon 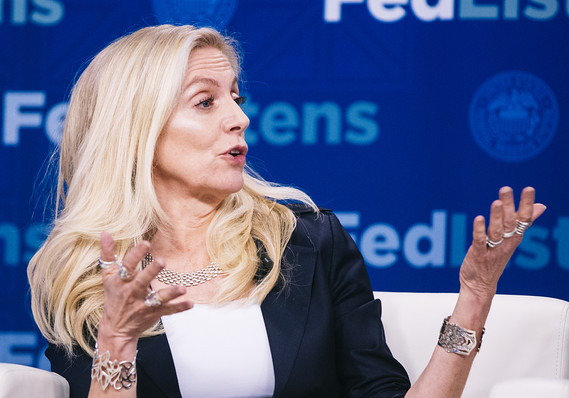 Bloomberg News/Landov
Fed Governor Lael Brainard is the only one of the five Fed governors who was not nominated by President Donald Trump.

Federal Reserve Governor Lael Brainard on Friday suggested she would support interest rate cuts in coming meetings to guard against downside risks to the economy.

In a speech at a Cleveland Fed conference with the community in Cincinnati, Brainard said “important downside risks” have emerged in recent weeks.

“Crosscurrents from policy uncertainty have risen since early May, crimping business investment plans, raising concerns in some financial market segments, and weighing on global growth prospects,” she said. Indicators of inflation has been disappointing, she added.

“The downside risks, if they materialize, could weigh on economic activity. Basic principles of risk management in a low neutral rate environment with compressed conventional policy space would argue for softening the expected path of policy when risks shift to the downside,” she said.

Julia Coronado, a former Fed staffer and now the president of MacroPolicy Perspectives, said that Brainard was supporting a monetary policy easing.

Brainard said she was worried about lower rates adding to financial market imbalances but that would not stop her from supporting an easing.

The best way to address financial imbalances is by using macroprudential tools, like activating the Fed’s countercyclical capital buffer, rigorous use of stress tests and beefed-up monitoring of leveraged lending, she said.

The Fed on Wednesday voted 9-1 to hold interest rates steady.

Coronado said she thought the Fed would move at the next meeting at the end of July and said the only debate was whether the move would be a quarter-point or half-point cut.

“I don’t think they would send a strong a signal at the June meeting as they did without fully intending to lower rates in July,” she said.

Brainard is the only one of the five Fed governors who was not nominated by President Donald Trump.

Fed Vice Chairman Richard Clarida did not specifically back a rate cut, saying only the central bank would “act as appropriate” to sustain the expansion.

Coronado said the Fed didn’t cut rates at the June meeting but argued Fed Chairman Jerome Powell effectively engineered an easing with his press conference and the dot-plot projections.