Those fissures could spread throughout the world-wide economy, potentially sending world-wide gross domestic product, or GDP, to its lowest annual pace of in 10 years, according to research from Oxford Economics, led by economists Adam Slater, and John Payne in a research report dated June 24.

“A combined slump in house prices and housing investment in the major economies could cut world growth to a 10-year low of 2.2% by 2020 – and to below 2% if it also triggered a tightening in global credit conditions.” the Oxford Economics researchers wrote.

A decade since the 2008-09 U.S. housing bubble imploded, sparking a global financial crisis, worries about the health of the global housing market persist.

An Oxford Economics’ proprietary gauge of housing conditions in the globe shows that home prices have declined by 10% and investments in houses have shrunk by 8%.

Housing prices across the globe have come in to focus as a protracted tariff squabble between the U.S. and China ripples throughout the global economy, compelling a number of central bankers to entertain the idea of lowering benchmark borrowing costs in an effort to stimulate, or just maintain, economic expansion. The Federal Reserve last Wednesday signaled a willingness to lower federal-funds rates, currently at 2.25%-2.50%, if financial conditions worsen.

In China, a decade long housing boom has sent home values to the lofty levels, with buying in the region underpinned by some $6.8 trillion in household debt, according to the Bank for International Settlements, a 70% rise in personal debt from just three years ago, with much of that tied to residential mortgages.

Oxford Economics says data show that residential investment in China is slowing as are starts for new construction also ebb (see chart below): 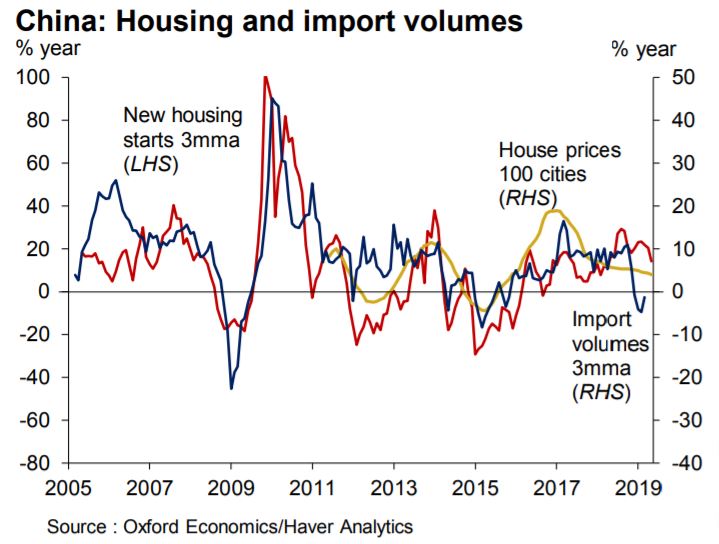 The researchers said that while home values globally aren’t falling outright, the pace of expansion has stalled substantially, which has raised some alarm bells. “Moreover, high house price valuations point to a risk of prices falling in the quarters ahead,” Slater and Payne wrote. The economists say that retreat in prices could spill over to the rest of the globe. Check out: Home builder sentiment slides as old worries plague construction industry[2] “Downturns in world housing markets have been important contributing factors to global recessions over the last thirty years, most dramatically in 2007-2009. As a result, the current slowdown in global housing is a cause for concern.”

recent article by Quartz[3] notes that, a decline in home prices has implications for large economies like China, which suffered a housing downturn in 2015, with Chinese policy makers fretting that a further erosion in its market could result in a steeper