We came across a very interesting find tonight when looking at the monthly year-on-year change in the value of the trade-weighted dollar index relative to the 3-month change in manufacturing payrolls since 2014.   We found that when the change in the value of the dollar is lagged 9-months in the past 58 months, there is a -0.74 correlation with the 3-month moving average in the change in manufacturing payrolls.  Rather surprising to find such a relatively tight fit. 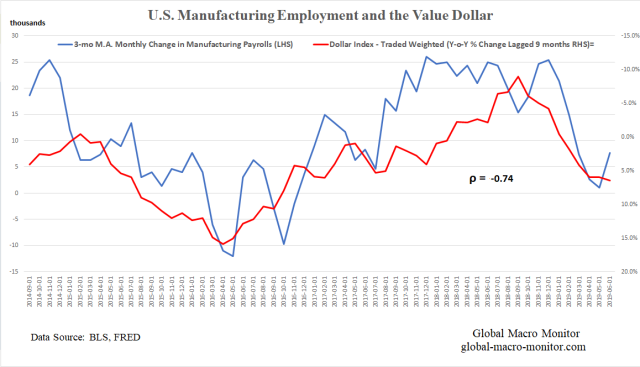 Yeah,  we hear you, “introduce and add leads, and lags to torture the data until it confesses.”  Not our intention, however, just trying to find a better prediction model.

Theoretically, it makes sense as manufacturers do not change their hiring decisions based on short-term moves in demand, relative price changes, or competitiveness.   A sustained move in the dollar for one year may incentivize management to change production and hiring decisions, which then takes months to ramp up.

The chart reflects the relationship.  Note the change in the dollar (right-hand side) axis has been inverted. That is a move up in the red line is the 9 month lagged year-on-year weakening of the dollar index for that particular month.

The same dollar-index has appreciated only 0.4 percent in Trump’s first 29 months and actually declined almost 10 percent his first year in office, creating a nice economic headwind during his honeymoon. 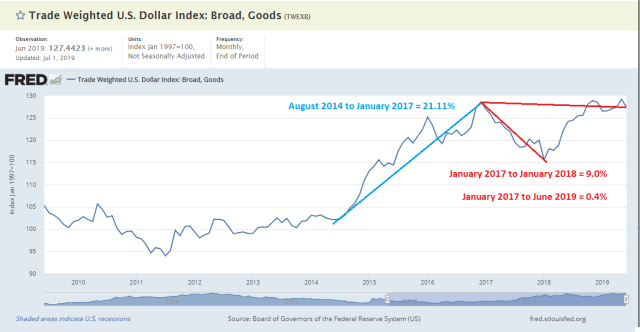 Also, interesting to note the S&P500 has pretty much gone nowhere since the January 2018 peak, up only 4.1 percent even in the midst of the all the Sturm und Drang over the past 360 trading days.

The three-month moving average of the monthly change in manufacturing payrolls has fallen from 25k per month in November and December 2018 to just not 8k after Friday’s payroll report.  We believe this, in part, is due to the lagged effect of last year’s dollar rebound.

Not also levels do matter not just changes or first derivatives, folks.

If our model is robust, manufacturing employment should remain weak until January 2020 as the lagged effect of the 2018 dollar rebound plays itself out.   We have no doubt President Trump will bring out the 2x4s to smack Jay Powell and the Fed upside the head in his effort to weaken the dollar.

We have no problem criticizing the Fed but the administration trying to stack or compromise the Fed’s independence?  That is a dangerous proposition.  As Joe, the only...

Read 270 times
Tweet
Published in Economics
More in this category: « Women’s World Cup final: A field guide to insulting gestures the Dutch and American teams could employ I had power of attorney for my late mother and lost $40,000 of her money on the stock market — do I need to repay it? »
back to top