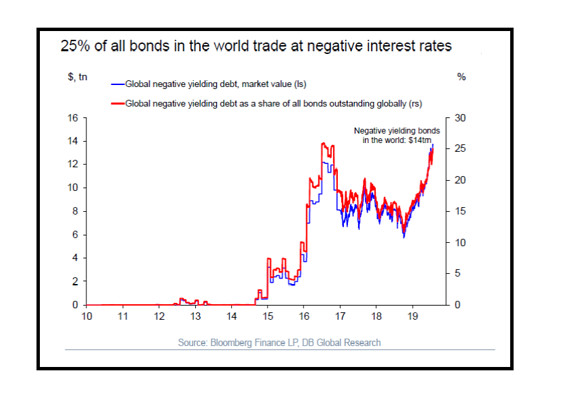 Deutsche Bank, Bloomberg
Much has been made of the outcropping of negative yielding bonds across the globe. Some $13 trillion in sovereign debt [1]now bears a negative yield, which means that investors get back less than their original investments for the privilege and perceived safety of owning government-backed debt. It’s an odd dynamic in markets but one that has proliferated after more than a decade of monetary-policy unorthodoxy intended to juice stubbornly low inflation and anemic growth in Europe and parts of Asia. Deutsche Bank Securities’s Chief Economist Torsten Sløk does a good job putting a finer point on the state of the fixed-income market, noting that 25%, or one out of every four bonds in the world, now yields negative rates. Read: Stocks, gold and bond investors face one simple fact: synchronized rally means nothing is cheap [2] Because bond prices rise as yields fall, negative rates also reflect the degree to which global markets are connected and a hunt for higher rates has driven bond prices up and yields down in Treasuries as well as higher-yielding corners of the debt market. The 10-year Treasury note TMUBMUSD10Y, -0.01%[3] was yielding around 2.07% as of midday Friday, well below its 10-year historic average of 2.48%, while the German bond TMBMKDE-10Y, -3.52%[4] was plumbing a historic nadir as recently as Thursday and now stands at minus 0.374%. Lower and negative yields in Europe and elsewhere, can impact domestic markets because the condition helps to support appetite for richer-yielding Treasurys and other richer yielding debt, holding rates lower, even when they theoretically should be rising along with the Dow Jones Industrial Average DJIA, +0.05%[5], Nasdaq Composite COMP, +1.08%[6]  and S&P 500 index SPX, +0.67%[7]  on a record-setting rally. In some instances, even so-called high-yielding debt, often referred to as junk bonds on Wall Street, bear negative yields[8]. Bank of America Merrill Lynch said junk bonds worth more than $3 billion are negative. This unnatural dynamic is one that is unlikely to resolve itself soon, with the European Central Bank on Thursday indicating that it will implement fresh quantitative-easing measures[9]
...