CNN’s Chris Cuomo once described[1] Fox News host Sean Hannity as “the most powerful person in the media” because the president does whatever he says.

That certainly wasn’t the case on Tuesday.

While Donald Trump and his oldest son were busy piling on Cuomo after a video of him threatening to throw some heckler down the stairs[2] went viral, Hannity offered up this Twitter TWTR, +2.68%[3] defense of his media rival:

I say good for @ChrisCuomo[4]

He’s out with his 9 year old daughter, and his wife, and this guy is being a jackass in front of his family.

Imho Chris Cuomo has zero to apologize for. He deserves the apology. https://t.co/VnyMNgz14U[5]

But before Hannity’s take, the president joined the anti-CNN mob by tweeting that “the truth hurts.” He then turned up the heat with these comments:

Trump compares Chris Cuomo's behavior to "a total out of control animal." pic.twitter.com/WMwOIgUpSq[7]

Guys I have a feeling Chris “Fake News Fredo” Cuomo is going to stick. #FakeNewsFredo https://t.co/1AaFQQAOxH[9][10] 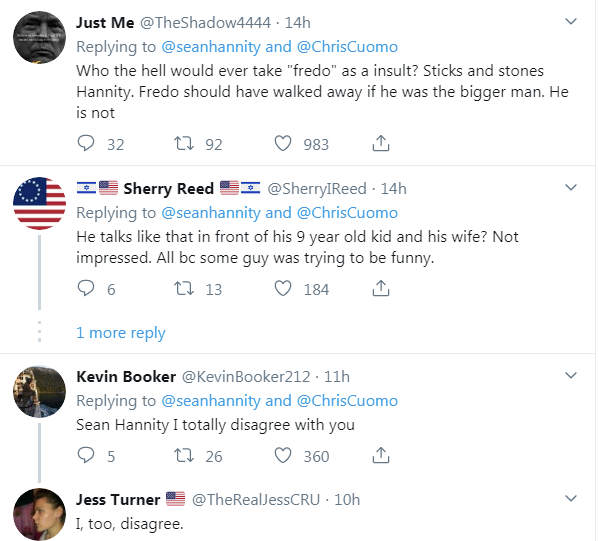 More in this category: « Epstein "Bedsheet"-Hanging Explanation Contradicted By Former Inmate Want To See What Stagflation Looks Like? »