On Thursday evening, we laid out a quick lesson in bond duration but especially convexity: the Austrian 100 Year bond, to wit.

And while this is of course great news for anyone who was long the Austrian century bond - or any other bond with extended duration - it is terrible news for those who were short rates, such as virtually everyone who listened to sellside research for most of 2018 and much of 2019. 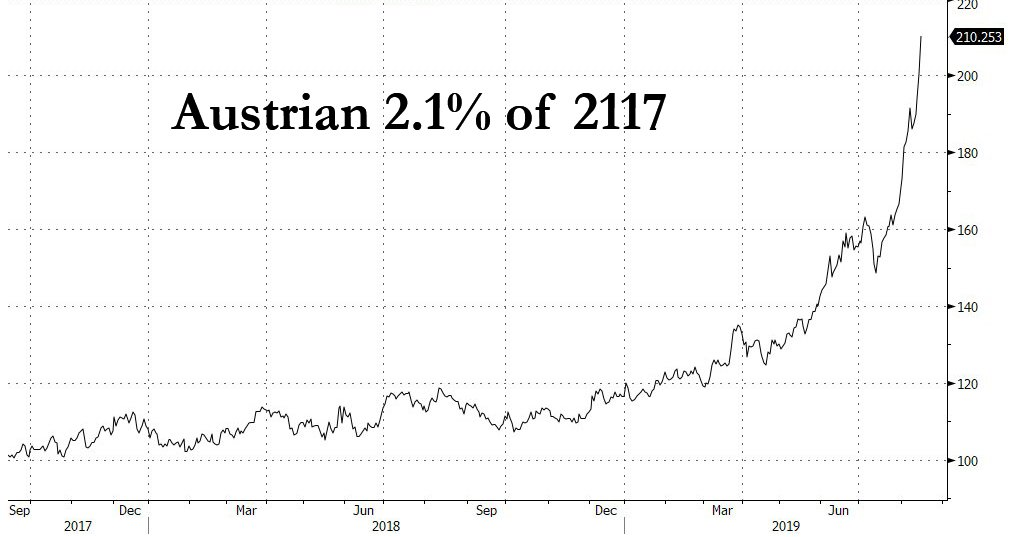 It is this convexity exposure that is the topic of the latest note of Mizuho rates strategist Peter Chatwell who writes this morning that "Convexity repricing has increased the potential of € carry trades."

Below we excerpt from his note.

The dramatic bullish repricing of global rates continued with vigor this week, with 30Y UST trading as low as 1.91% intraday. This is a massive repricing of duration, which we have been advocating since Q1 of this year, and the pace of the move has made an impact on those with convexity/gamma exposure. The classic convexity hedging trades have been evident all week – long-end swap spreads are tighter in most currencies and the 10s30s curves have accelerated their flattening.

The convexity repricing is a particularly strong indicator that this move has a fundamental basis behind it. Moreover, as equity markets have weakened this week, it is evident that markets are reflecting elevated global recession risks. The manufacturing sector in the US and Germany are likely to already be in recession and, with Germany’s Q2 GDP having printed at -0.1% QoQ, the weakness of soft data are now being confirmed by the hard data, allowing markets to price recession risks much higher. The 2s10s inversion of UST and UK Gilt curves has seen the recession fears enter mainstream news, allowing the market’s fears to begin to be transmitted to the real economy. This should hurt corporate investment and consumer sentiment in the coming quarters.

“We need a significant and impactful easing package in September” was the comment from ECB’s Olli Rehn which really got EGBs moving yesterday. It is more telling of how distressed rates markets have gotten, with the huge bull flattening/convexity move in recent weeks, that such a comment made such an impact. After all, global data have simply been awful, stock markets are very weak, Donald Trump and other global actors as volatile as ever. The market should feel much more confident in monetary easing from the ECB than is currently the case.

Indeed, our most recent Fair Value In Rates publication, "go long duration as currency war drags on easing impact", is almost out of date given the recent downside surprises on the...

More in this category: « U.S. stocks lower, giving up early boost from bullish earnings, retail sales My husband and I paid off $193,000 in debt — but we are still saving and have no life »