Tory rebels are preparing emergency legislation to stop a No Deal Brexit. Such threats increase the odds of No Deal. 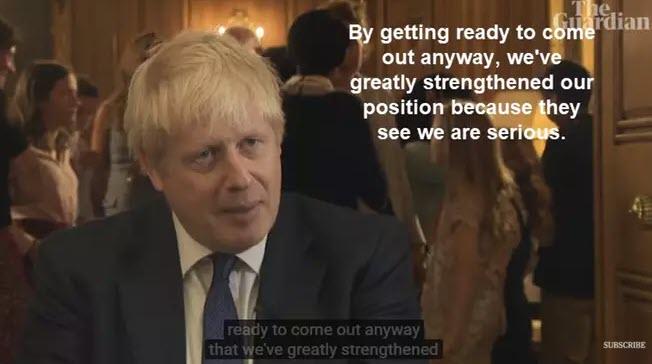 The gloves have come off on both sides. MPs are now plotting a strategy to take total control of the House of Commons, and anti-Brexit Lords have devised a strategy to frustrate a filibuster. The important question is not whether a legislative route is theoretically possible within the time limits - we think it probably is - but whether the rebels have the votes, and if they do, whether such legislation is effective. On the first, we don’t think they do. On the second, we are sure that it is not.

Regarding time limits, Eurointelligence seems to have come around to my point of view that the real physical limit may be September 9.

Alternatively, both of us noted a chance of everything getting done precisely on September 3. That mathematical chance always existed.

Possibly we are discussing two different things depending on what Eurointelligence means by "legislation".

The point is moot because even if there is time and there is a sufficient number of votes, Eurointelligence has the view I have stated many times recently "we are sure" that it won't work.

There is a lot of arm-twisting going on in the background - coupled with the implicit threat that a vote in favour of anti-Brexit legislation would most likely trigger elections and the certain deselection of Tory rebels. Tories and Labour MPs are both aware that extension is not a popular option in the country. The April extension brought victory to Nigel Farage’s party in the European elections in May. If parliament votes in favour of a law to extend, it is possible that Johnson would then risk a pre-Brexit election, with the support of Corbyn. We think he will probably do at least as well as Theresa May did two years ago, but with MPs that are committed to his Brexit strategy.

Not Understanding the Law

The default legal position is that Brexit happens on October 31.

The UK cannot unilaterally change that even if Parliament passes a law declaring it illegal.

I have been amused from the beginning about such tactics, have frequently stated such laws are not binding. Eurointelligence comments similarly.

The Remainers’ biggest weakness is a lack of an overall strategy that extends beyond the narrow confines of the House of Commons and its ancient rules. The single biggest misunderstanding in the Brexit process relates to the nature of Art. 50, which is EU law, not UK law. We were reminded of this once again yesterday when we saw an article in Prospect magazine, which compared the five-week prorogation to Hitler’s Reichstag fire. Apart from the...

Read 403 times
Tweet
Published in Economics
More in this category: « When LeBron James chose Nike in 2003, he gave up $28 million — it could end up making him $1 billion 5 highly-ranked charities helping with the Amazon rainforest fires »
back to top