The Internet Party One citizen... one vote... zero government interference.
updated 2:18 PM, May 6, 2021 UTC
Headlines:
"The" Science Is Coming For You Again!: "The" Science Is Coming For You Again! Authored by Robert Wright via The American
Lucinda Franks, Pulitzer Prize-winning journalist, d: Pulitzer Prize-winning journalist Lucinda Franks — who wrote a loving memoir of
Liz Cheney: GOP is "at a turning point": Rep. Liz Cheney (R-Wyo.) doubled down on her break from former President Trump in
Cheney hits 'Trump cult of personality,' says she'll: House Republican Conference Chair Liz Cheney (Wyo.) on Wednesday urged the GOP to
Biden: Republicans are in the midst of a 'mini-revol: President Biden said Wednesday that Republicans are in the midst of a "mini-revolu
Cryptos: As dogecoin prices spike, one big-league ba: The pair of seats sold for 100 Dogecoin, which is worth about $50 as of Tuesday.
Giuliani Hits Bidens With New $3 Million "Ukraine-Latvia-Cyprus" Money Laundering Accusation

Rudy Giuliani leveled serious new claims at the Bidens in a series of Monday morning tweets. Chief among them is a claim that $3 million was laundered to former Vice President Joe Biden's son, Hunter, via a "Ukraine-Latvia-Cyprus-US" route - a revelation he claims was "kept from you by Swamp Media." 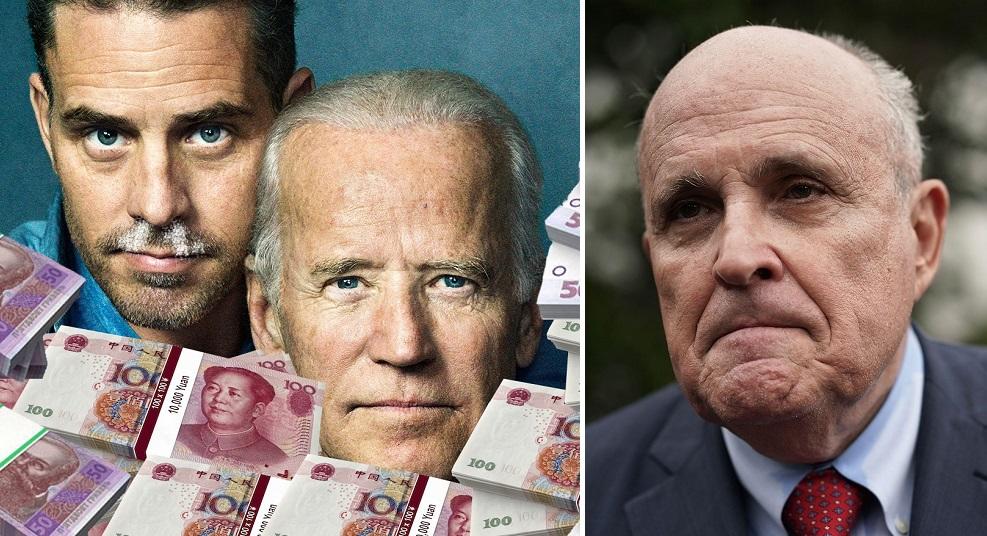 Giuliani also says that Obama's US embassy instructed Cyprus not to reveal the dollar amount.

NEW FACT: One $3million payment to Biden’s son from Ukraine to Latvia to Cyprus to US. When Prosecutor asked Cyprus for amount going to son, he was told US embassy (Obama’s) instructed them not to provide the amount. Prosecutor getting too close to son and Biden had him fired.

Today though it’s the $3 million laundered payment, classical proof of guilty knowledge and intent, that was kept from you by Swamp Media. Ukraine-Latvia-Cyprus-US is a usual route for laundering money. Obama’s US embassy told Cyprus bank not to disclose amount to Biden. Stinks!

Trump's personal attorney then mentioned China - where journalist Peter Schweizer reported Joe and Hunter Biden flew in 2013 on Air Force Two. Two weeks later, Hunter's firm inked a private equity deal for $1 billion with a subsidiary of the Chinese government's Bank of China, which expanded to $1.5 billion, according to an article by Schweizer's in the New York Post.

Biden scandal only beginning. Lots more evidence on Ukraine like today’s money laundering of $3 million. 4 or 5 big disclosures. Also the $1.5 billion China gave to Biden’s fund while Joe was, as usual, failing in his negotiations with China is worse.

Giuliani then went on to tweet that the Bidens lied about not discussing Hunter's overseas business.

On Saturday, Joe Biden said he "never" spoke with Hunter about the Ukrainian energy company that Hunter sat on the board of while being paid $50,000 per month. As you're doubtless aware by now, the elder Biden threatened to withhold $1 billion in US loan guarantees from Ukraine if they didn't fire the investigator probing the company, Burisma.

Biden says he never talked to his son about his overseas business. Do you think we can prove, with our fact a day disclosures, it’s a lie-a false exculpatory statement. Do we have to prove, or do you already know, it’s a lie, and an incriminating statement.

Hunter, however, admitted in July that the two did speak about his Ukraine business "just once," telling the New Yorker "Dad said, ‘I hope you know what you are doing,’ and I said, ‘I do'"