In late-September, Nomura's Charlie McElligott detailed his "crash-down then crash-up" thesis and the injection of last week’s “positive macro catalysts” (into an investor thesis which was largely “long worst-case scenario, short good news”) has since kicked-off a +5.0% rally in SPX in 9d / +3.6% rally in 5d (after the initial -5.6% move in Spooz from Sep 19th through Oct 3rd). 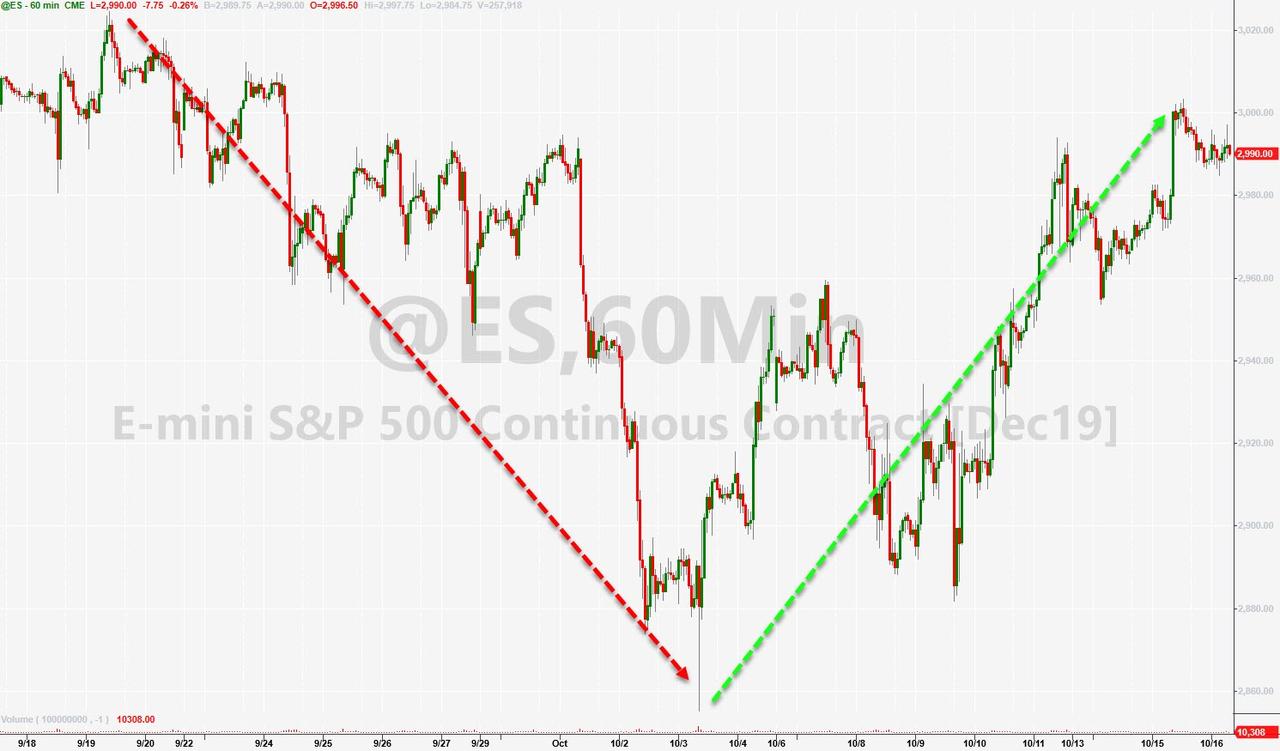 Obviously too, this injection of at least “optically good news” with China / US Trade talks and constructive Brexit convos has helped to create a meaningful selloff in Rates / USTs, with 10Y cheapening 20bps since last Thursday - and which per my ad nauseum points on the 2019 “Everything Duration” trade means that US Equities “1Y Price Momentum” factor has then too accordingly sold off -3.3% over that same 4d+ window.

But what is really behind this sling-shot move in US Equities?

McElligott explains, it's the VIX complex stupid, as a 'mechanical' VIX crunch into expiry sends US equity futures back near potential "trigger" levels for CTAs to re-leverage long.

Just as we envisioned (and almost identical to the August analog mentioned at the time), the “accelerant flow” has come in the form of second-order impacts across the VIX-universe, “daisy-chaining” in three critical ways (Dealer, ETN and Systematic strategy implications / inputs):

Due to the outsized Oct “VIX Call Wing” buyer who has the Street “short Gamma” in VIX upside, there is a significant amount of VIX futures / VIX upside for sale into this morning’s VIX settlement from Dealers who had to hedge the “crash” they were short, and are now choking on the “decay” implications. 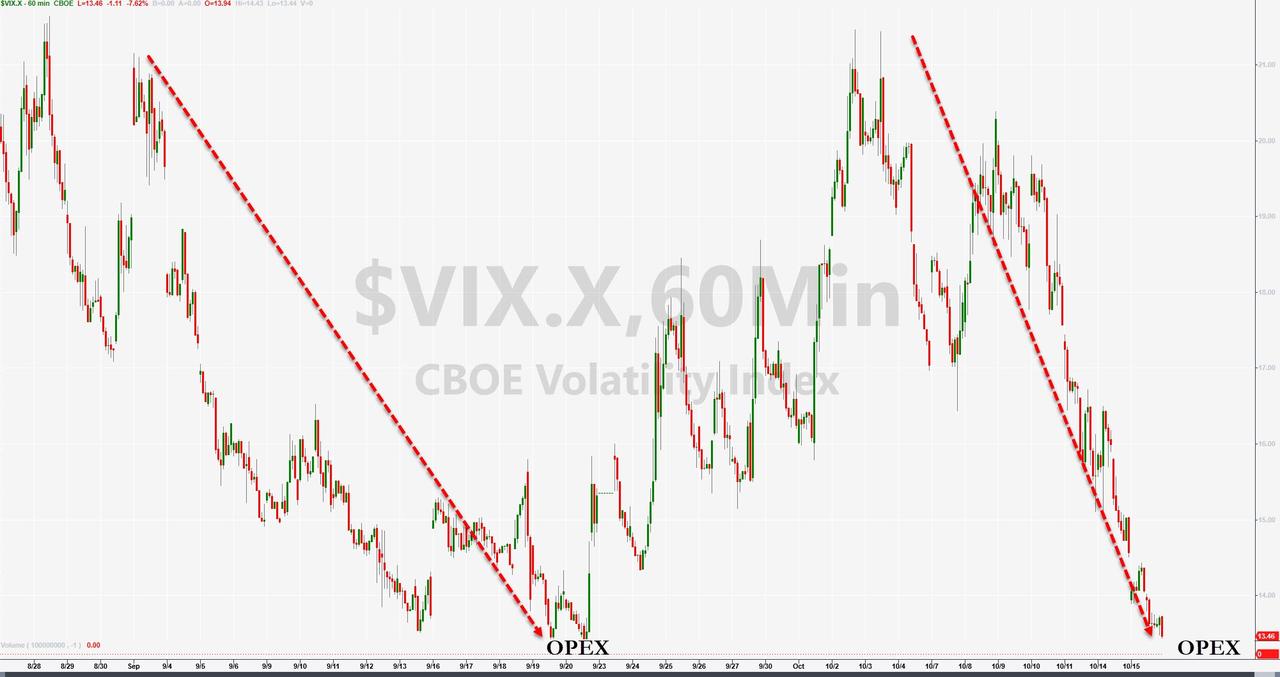 This said, the most notable VIX options “decay” input over the past few sessions (on the UX1 move from 20.25 just 6 days ago to yesterday’s “low tick” of 13.50) is once-again the enormous impact of the VIX ETNs (which remain so “Long Vega” - see chart below), as these products and their rebalancing mechanisms completely overwhelm market capacity into their “rolls” from front-month to second-month. 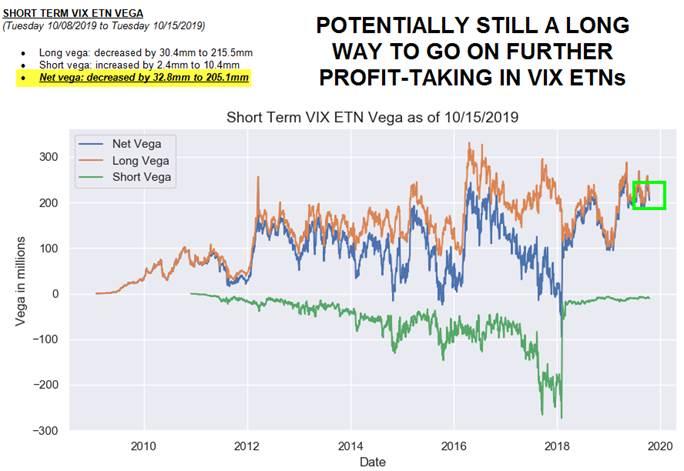 The “roll volume” of these Short Term VIX ETNs is far beyond market capacity to digest, and is “the” largest reason that we have seen UX1 print its “local lows” on the day ahead of VIX expiry for each of the past seven months, however before then again seeing VIX grind higher thereafter.

And finally, what do these outsized “rolls” (and crash puke) then do as further VIX complex “knock-on”?  They create a massive steepening in the VIX futures curve, which then acts as a “signal” for Systematic “roll-down” players to re-enter the trade in size and further pressure the front-end. 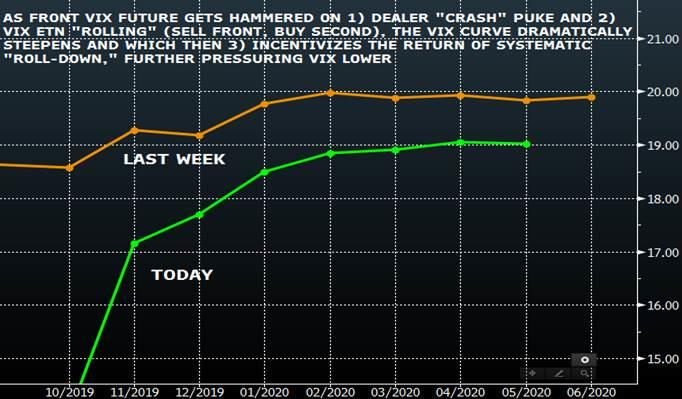 And now following the VIX slingshot and Dealer “crash hedge” purge which from a “mechanical flows” perspective has created the melt-up flows in US Stocks, the SPX /...

Read 303 times
Tweet
Published in Economics
More in this category: « How Wall Street Destroyed Capitalism - Part 2 Inspired by AOC, Megan Rapinoe and Greta Thunberg? You should be, according to this list »
back to top