As the major equity benchmarks hover close to all-time highs, enthusiasm for the ongoing bull market appears to be mild, based on trading volume.

Some analysts fear dwindling volume could spell trouble for investors during the next selloff, setting equity investors up for a repeat of last year’s fourth-quarter swoon of nearly 20%. 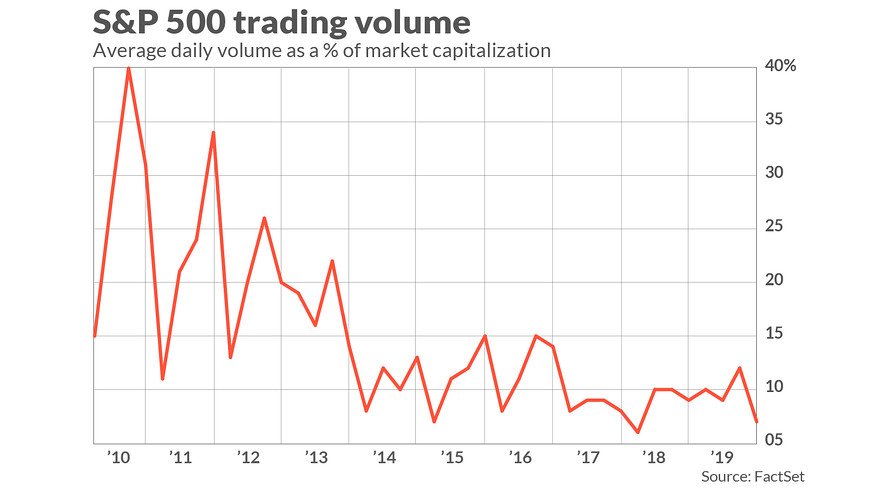 FactSet
“The numbers are astonishing,” Tim Quast, president of market analytics firm ModernIR told MarketWatch. “One potential risk is that there will be a lack of buyers during times of stress and that the absence of liquidity will lead to fire sales.” Quast pointed to other figures reflecting declining liquidity in S&P 500 stocks, including data from ModerIR that showed the average number of shares per trade has fallen from 248 in 2015 to 133 today. “A great illustration of the risks here is what happened in the fourth quarter of 2018,” he said, arguing that the nearly 20% decline in the S&P 500 index last year was exacerbated by a lack of willing buyers even as stock prices fell to attractive valuations. These data dovetail with a recent report from Bank of America’s chief equity and quant strategist [2]Savita Subramanian, who wrote that she worried that trading volume for large cap U.S. stocks is increasingly reliant on “non-fundamental investors,” including algorithmic investment funds, passive investment funds and high-frequency traders.“Banks no longer provide the same liquidity as [before the Great Financial Crisis]. The result is a bid-ask spread for the average S&P 500 stock that is close to a multi-year high,” she wrote. The bid-ask spread is the difference between the prices quoted for an immediate purchase (the bid) and the immediate sale (the ask) of an asset.Jerry Lucas, senior trading strategist at UBS Global Wealth Management, said that the rise of high-frequency trading algorithms, which increasingly serve as market makers, are “also causing headaches for traders.”“The algos provide great liquidity when there is no news, but when a big new comes in the algos go away until things stabilize,” he said. Other market observers say that looking just at volumes for individual stocks no longer presents a full picture of the S&P 500 universe, which is increasingly comprised of derivatives like exchange-traded funds, futures and options. “Trading volumes in stocks is a small part of the story compared to trading in indices, futures, and ETFs and so on,” Tim Edwards, managing director of index investment strategy at S&P Dow Jones Indices told MarketWatch. “It doesn’t alarm me that you’re seeing