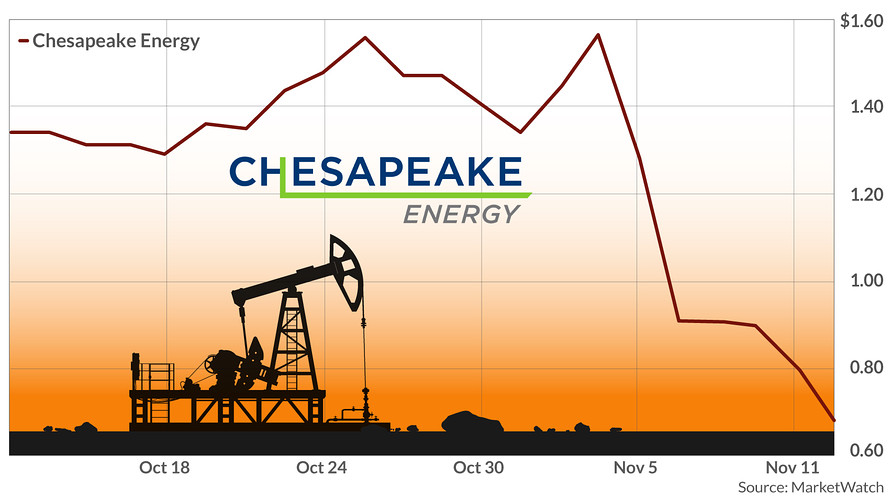 Chesapeake Energy Corp. shares took another dive Tuesday, pushing them well below $1 to hit their lowest price in more than 25 years as the natural-gas producer’s going-concern warning continued to reverberate in the equity markets and beyond.

Chesapeake CHK, -15.60%[1]  stock fell 13% to 70 cents, putting it on track for its lowest close since May 9, 1994. It traded as low as 64 cents, the lowest intraday level since February 1999. The stock has been down for six straight sessions, losing nearly 55% during that period, its worst six-day stretch on record.

The natural-gas producer last week rang the alarm in its quarterly filing with regulators and reported a quarterly loss that was wider than Wall Street expected. [2]

Chesapeake’s most actively-traded bonds by volume on Tuesday fetched an average of 55.29 cents on the dollar, a record low, according to bond pricing and trading platform MarketAxess.

Bond prices move in the opposite direction of yields, putting the same Chesapeake 8% coupon bonds due in 2027 at a yield of about 19.55%.

“‘Too big to fail’ remains the prevailing view on Chesapeake,” said Paul Sankey, an analyst with Mizuho.

Shares have traded below $5 for almost four years, but having language around the solvency of the company in writing perhaps “was the flashpoint,” said James Mick, a portfolio manager with Tortoise Advisors.

Chesapeake “has plenty of options at its disposal and a bankruptcy is not imminent in our view,” he said.

Chesapeake has long been regarded as a pioneer in getting hydraulic fracturing, or fracking, into widespread use in the U.S. and other parts of the world.

The technique, which involves using a mix of water, sand, and other additives to coax oil and gas from dense rock formations, has unlocked huge oil and gas deposits previously trapped in shale rock.

The company has been in bad shape before: In 2016, shortly before the death of co-founder and long-time Chief Executive Aubrey McClendon, it had to reassure investors it was not on the brink of bankruptcy[4].

McClendon died in a fiery car accident[5] a day after being indicted on antitrust charges around allegations he had conspired to keep land-lease rights in Oklahoma low between 2007 and 2012. He had denied the charges and vowed to clear his name.

McClendon co-founded Chesapeake in 1989 and agreed to retire in 2013 after facing intense criticism about Chesapeake’s spending and for allegedly enmeshing company finances with his own borrowings. An internal investigation at the time found no evidence of wrongdoing.

Shares of Chesapeake have lost...

Read 658 times
Tweet
Published in Economics
More in this category: « Horowitz Report Will Be Damning, Criminal Referrals Likely The Impeachment Pantomime - A Primer »
back to top