A pair of ominous patterns are forming in the Nasdaq benchmarks, which could signal that a stock-market climb, fueled by a hoped-for tariff detente between the U.S. and China, may be starting to unwind—or at least stall out.

Analysts at popular blog SentimentTrader note that for the first time in months on Wednesday, the Nasdaq Composite Index COMP, -0.11%[1] simultaneously triggered a so-called Hindenburg Omen and an Ohama Titanic Syndrome.

Named after the German dirigible that notoriously exploded in 1937, the Hindenburg Omen is formulated to predict market crashes, or severe downturns, by synthesizing data, including 52-week highs and lows, as well as stock moving averages on the New York Stock Exchange. In this case, it is forming in Nasdaq-listed stocks.

The Omen was created by Jim Miekka, a blind mathematician, marksman and teacher, who died several years ago. Miekka claimed that his indicator had been an accurate predictor of every market crash since 1987.

Separately, the spooky sounding Titanic Syndrome was coined by Bill Ohama in 1965, and is viewed as a “preliminary sell signal.” Prominent chart specialist Tom McClellan has told MarketWatch in the past that when lows surpass highs, within seven trading days of a one-year peak for an index, an Ohama Titanic Syndrome signal is triggered.

Jason Goepfert, head of SentimentTrader and founder of independent investment research firm Sundial Capital Research told MarketWatch that for his purposes, he used the following conditions to help determine whether the Titanic syndrome had been triggered: 1) The Nasdaq-100 NDX, -0.14%[2] closed at a 52-week high at some point in the past 7 sessions, and 2) New 52-week lows outnumber 52-week highs on the Nasdaq. ... 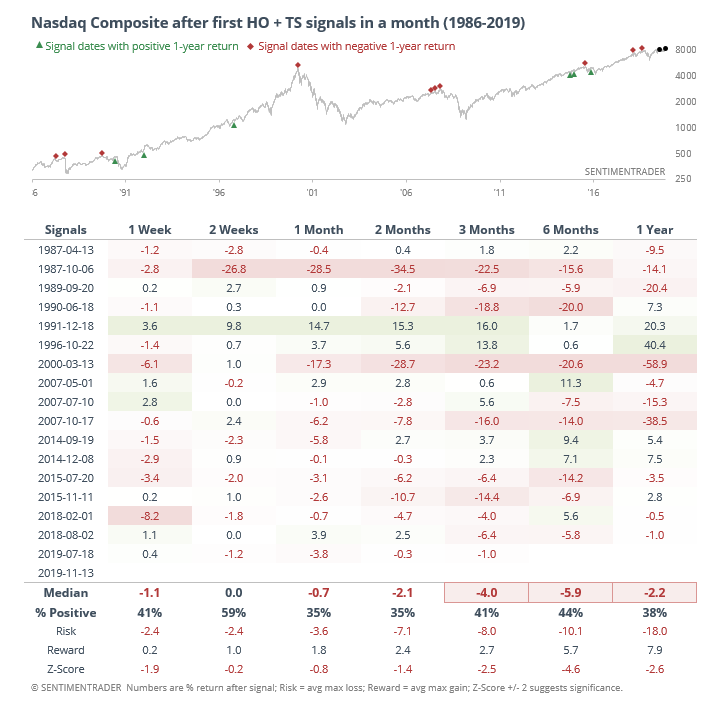 This is how Goepfert explains how he thinks about the formation of the Omen: For this particular signal, we use three criteria, which likely differ from other sources: 1) The Nasdaq-100 is above its 50-day moving average, 2) Both new 52-week lows and 52-week highs on the Nasdaq are greater than 2.8% of all advancing and declining issues, and 3) The Nasdaq McClellan Oscillator is negative. When the signal triggers, it highlights a “split” market, which is unhealthy. Multiple signals in a cluster is a worrying sign. Traditionally, the signal is canceled after 30 days or if the Oscillator turns positive again, though we’ve seen that it can lead to market trouble several months in advance. The strategist said both developments are “ a warning sign that typically precedes trouble” over the coming months, which is how it played out this summer. However, he did caution that only one such instance of those patterns, rather clusters,