Stock market booms are often based on a “good” story or a narrative of better things to come. Excess liquidity usually provides the fuel for bull market runs, as fundamentals of growth and profits usually don’t play a major role, at least not initially.

In the past 5 years, the S&P 500 stock index has risen over 50% and during that period operating profits for non-financial companies have declined over 15%, a drop that has always been associated with economic recessions. 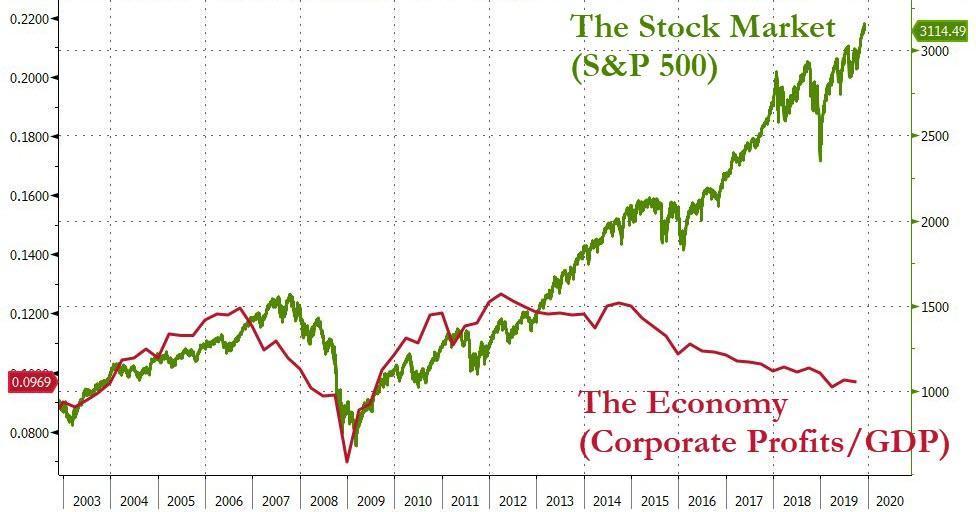 The big test for policymakers is how to assess when “irrational exuberance” over easy money has gone too far, creating a vision of little risks and a persistent bull market in stocks that unduly separates finance from the economy increasing the risk of a bad outcome?

The Bureau of Economic Analysis reported that Q3 operating profits for all US companies, large and small, public and private, totaled $2.087 trillion, off 0.8% from year ago levels. The decline in profits in the past year continues a long stretch of weak corporate earnings. In fact, operating profits peaked in Q3 2014 and over the past 5 years are off nearly 5%.

The weakness in operating profits is centered in non-financial companies—with the biggest declines in the manufacturing sector. In the past year, profits for non-financial corporate businesses declined nearly 5%, bringing the cumulative 5-year fall to 15.5%--three times larger than the decline for all companies.

Profit declines of this scale, and even less, have always been associated with an economic recession. In fact, since 1975, there have been 6 recessions and of those only two--- the dot.com bust and the Great Financial Recession - recorded larger declines in operating profits than the current slump.

Yet, despite the decline in operating profits the broad equity markets has posted very strong gains, with the S&P 500 index up over 50% in the past 5 years, and the NASDAQ up over 80% - with both indexes posting gains of 25% to 30% in 2019 alone.

Divergence between profits and equity markets are not uncommon, but the scale and length of the current divergence is.
The primary fuel for the stock market run has been easy money and the promise of more easy money. Even though the economy’s performance in 2019 in terms of growth, jobless rate and core inflation was fairly close to the Fed’s forecast policymakers voted to reduce official rates three times instead of the initial plan to raise rates twice. That’s the equivalent of 125 basis points of an easier money stance relative what the financial markets had been expecting. Policymakers have also made a promise not to raise official rates until reported inflation is well above its preferred rate of 2%.

More in this category: « Dow falls more than 200 points on weak manufacturing data, trade concerns Happy hour can wait — This simple trading strategy has been a big winner »