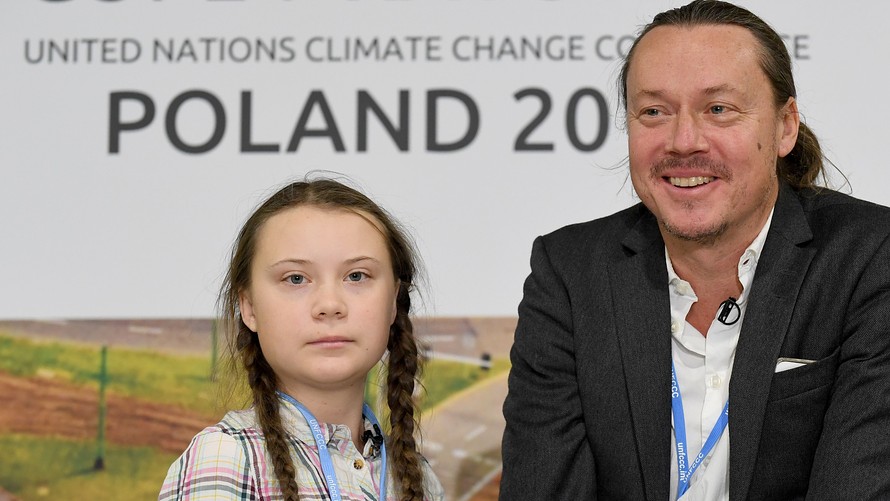 When is it ever OK to skip school?

Perhaps when a Fridays-only solo climate-change protest behind the absences stirs millions of followers to action, forces global leaders to listen and earns the respect of renowned nature documentarian David Attenborough.

For activist Greta Thunberg’s father Svante her missed class time and globe-trotting in the name of saving the Earth has given him back a smiling, energized daughter from a teenager who had gone virtually silent with depression.

The elder Thunberg admits in a BBC interview aired Monday[1] that he first thought his daughter’s position on the “front line” of the climate-change battle was “a bad idea.”

But now millions of people have been inspired to join the 16-year-old in raising awareness of environmental issues, a number of followers so significant that it earned the teen commendation from Attenborough as they connected via Skype when she guest-edited a BBC radio program[3]. She told Sir David how he inspired her activism. The broadcaster and naturalist in turn told Greta she had “achieved things that many of us who have been working on the issue for 20 years have failed to do.”

He added that the teen was the “only reason” that climate change became a key topic in the recent U.K. general election.

Read: How Greta Thunberg and ‘flygskam’ are shaking the global airline industry[4]

Although the senior Thunberg said Greta was much happier since becoming an activist, he still worries about the “hate” she faces. Her father said he was particularly worried about “the fake news, all the things that people try to fabricate [about] her — the hate that that generates” including from U.S. President Trump.

Read: Trump didn’t win Time’s ‘Person of the Year,’ so he mocks the teen who did[5]

Thunberg said his daughter had struggled with depression for “three or four years” before she began her school strike. “She stopped talking... she stopped going to school,” he said, adding that he and his wife spent more time with both of their daughters and sought medical help for Greta’s depression.

Greta was diagnosed with Asperger syndrome, a form of autism, at age 12. It’s a disorder she has likened to a “superpower” of narrow focus that allows her to “see things from outside the box.”

Read: Greta Thunberg has likened her Asperger syndrome to a ‘superpower’ — some Fortune 500 employers appear to agree[6]

Thunberg has also accompanied his daughter on her sailing expeditions to U.N. climate summits in New York and Madrid, a mode of transportation the young activist opted for over air travel because of the smaller carbon footprint.