While he’s close, Donald Trump is not the least popular president heading into his reelection year, and the MAGA crowd can thank Gerald Ford for that.

According to FiveThirtyEight’s presidential tracker[1], 42.6% of Americans approve of Trump’s job performance, which is described as a “pretty typical number” for the president, although the tangle with Iran could change that.

Here’s a look at how other presidents have fared: ... 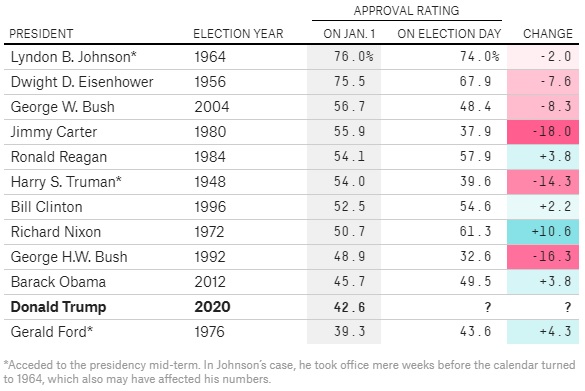 As you can see, only Gerald Ford was less popular, with a 39.3% approval rating on Jan 1, 1976, and he lost to Jimmy Carter later that year. But those numbers, as the chart shows, tend to shift over the year, so Trump’s rating, which has stubbornly stuck around where it is now, could take a turn. “So Trump’s low approval ratings as of January aren’t necessarily a problem for him in November,” FiveThirtyEight’s Nathaniel Rakich said. Still, he added, with the country so polarized, it appears to be trickier than in the past convincing voters from the other side of the aisle to jump ship.“Take Barack Obama, who had a similarly intractable approval rating over the course of his presidency,” Rakich explained. “From Jan. 1 to Nov. 6, 2012 — the year of his reelection campaign — his numbers ticked up by only 3.8 points. What this means in practical terms is that it’s increasingly difficult for presidents to win over new supporters.”He pointed out that since Dwight D. Eisenhower, presidents with an average approval rating of 48.4% or higher have all won their reelection campaigns. All those lower than 43.6% have lost. Then again, before that, Harry Truman managed to beat out Thomas Dewey despite a dismal approval rating of 39.6% on Nov. 2, 1948. “So in the end, Trump’s current approval rating doesn’t sound a clear signal one way or the other on the question of his reelection,” Rakich wrote. “But it does maybe hint that he starts off the new year at a disadvantage.”References^FiveThirtyEight’s presidential tracker (fivethirtyeight.com)

More in this category: « How Google Quietly Amassed A Real-Estate Empire In Manhattan Macron Abandons Plan To Raise Retirement Age As Rock-Throwing Protesters Get Tear-Gassed »