The Internet Party One citizen... one vote... zero government interference.
updated 9:46 PM, Aug 8, 2020 UTC
Headlines:
'This already exists': Democrats seize on potential : Democrats pounced on President Trump’s announcement Friday that he may sign an e
Hillary Clinton roasts New York Times columnist over: It's only been four years since Hillary Clinton ran for president, but New York Ti
The Tell: Stock-market expert sees a ‘monstrous’: The best start to an August for the stock market in years might get even better, a
PPP application window closes after coronavirus talk: The application window for a small business aid program is closing at the end of t
Future is Bright for House Democrats: By Nathan L. Gonzales & Jacob Rubashkin After losing 40 seats and the House majori
"It's Very Apocalyptic": Workers Return To Untouched: "It's Very Apocalyptic": Workers Return To Untouched Office 'Time-Capsules' 4 Mont
Trump Blasts Bloomberg's "False Advertising", 'Mini Mike' Responds

Having spent more money on ads than the rest of the Democrat field combined (as we noted , Bloomberg admitted over the weekend that he's "spending all his money to beat Trump", Mike Bloomberg's media presence may be starting to get to President Trump.

In a twin-tweet to kick off the week, the president took aim at "Mini Mike" claiming "false advertising" over his healthcare plan:

Mini Mike Bloomberg is spending a lot of money on False Advertising.

I was the person who saved Pre-Existing Conditions in your Healthcare, you have it now, while at the same time winning the fight to rid you of the expensive, unfair and very unpopular Individual Mandate, and, if Republicans win in court and take back the House of Represenatives, your healthcare, that I have now brought to the best place in many years, will become the best ever, by far.
I will always protect your Pre-Existing Conditions, the Dems will not!

But Bloomberg (or rather his team we suspect), responded, calling for the president to address them directly next time...

We suspect it won't be long before he does. 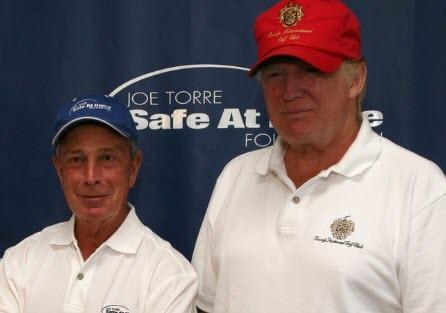