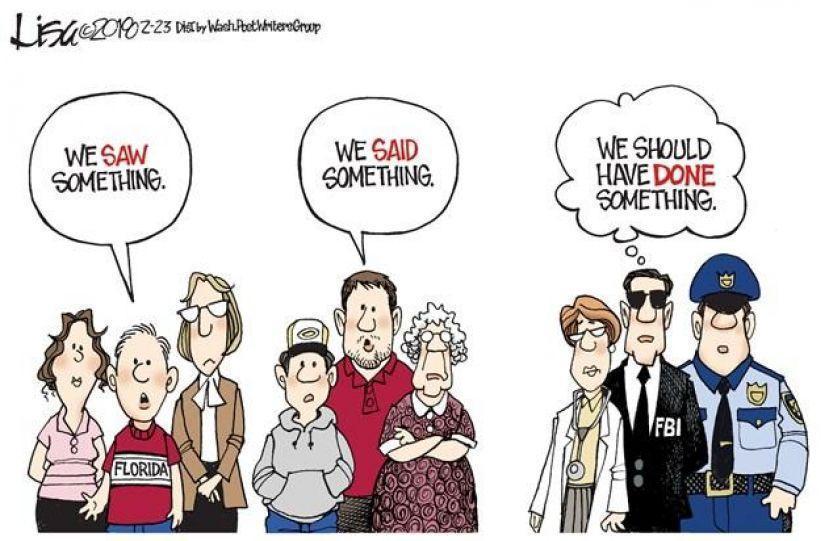 In the American police state, police have a tendency to shoot first and ask questions later. In fact, police don’t usually need much incentive to shoot and kill members of the public.

Police have shot and killed Americans of all ages—many of them unarmed—for standing a certain way, or moving a certain way, or holding something—anything—that police could misinterpret to be a gun, or igniting some trigger-centric fear in a police officer’s mind that has nothing to do with an actual threat to their safety.

So when police in Florida had to deal with a 19-year-old embarking on a shooting rampage inside Marjory Stoneman Douglas High School in Parkland, Fla., what did they do?

There were four armed police officers, including one cop who was assigned to the school as a resource officer, on campus during that shooting. All four cops stayed outside the school with their weapons drawn (three of them hid behind their police cars).

Not a single one of those cops, armed with deadly weapons and trained for exactly such a dangerous scenario, entered the school to confront the shooter.

Seventeen people, most of them teenagers, died while the cops opted not to intervene.

Let that sink in a moment.

Now before your outrage bubbles over, consider that the U.S. Supreme Court has repeatedly affirmed (most recently in 2005) that police have no constitutional duty to protect members of the public from harm.

Yes, you read that correctly.

According to the U.S. Supreme Court, police have no duty, moral or otherwise, to help those in trouble, protect individuals from danger, or risk their own lives to save “we the people.”

In other words, you can be outraged that cops in Florida did nothing to stop the school shooter, but technically, it wasn’t part of their job description.

This begs the question: if the police don’t have a duty to protect the public, what are we paying them for? And who exactly do they serve if not you and me?

Why do we have more than a million cops on the taxpayer-funded payroll in this country whose jobs do not entail protecting our safety, maintaining the peace in our communities, and upholding our liberties?

Why do we have more than a million cops who have been fitted out in the trappings of war, drilled in the deadly art of combat, and trained to look upon “every individual they interact with as an armed threat and every situation as a deadly force encounter in the making?

I’ll tell you why.

It’s the same reason why the Trump Administration has made a concerted effort to expand the police state’s power to search,...

Authored by John Whitehead via The Rutherford Institute,

More in this category: « Why Do Governments Fail? (The Exponent Problem) A Top Secret Security Clearance Doesn't Guarantee Secrecy »