The Internet Party One citizen... one vote... zero government interference.
updated 10:48 PM, Jul 6, 2022 UTC
Headlines:
Huge rent price spikes may be coming to an end: Data: Zumper; Chart: Axios Visuals Rent prices have soared over the last year, b
Study: Most reporters don't believe in 'equal' cover: When it comes to equal treatment of all sides in the news, the public expects far
: Target expands promotions for students and teacher: Target back-to-school plans include deeper discounts, which could be a welcome per
Norway-Russia Tensions Escalate Over Sanctions Impac: Norway-Russia Tensions Escalate Over Sanctions Impacting Arctic Islands Authored
Kamala Harris ‘seriously’ roasted for repetitive: Vice President Kamala Harris was “seriously” skewered online for a repetitive,
Court won't block Mississippi's abortion trigger ban: A judge in Mississippi on Tuesday denied a request from the providers asking to te
By Bradley Wascher

Control of the House majority could very well hinge on somewhere like Florida, given its status as one of the most populated and electorally consequential states. And it was one of the last states to finalize a new congressional map this redistricting cycle. But now that we know what its new district lines will look like, the Sunshine State gets to add another near-superlative distinction: one of the most extreme gerrymanders in the country.

Florida has gained at least one congressional seat in every redistricting cycle since 1930, and the most recent round of census reapportionment was no different. To account for population increases, the state will add another representative to its congressional delegation, bringing the total to 28. 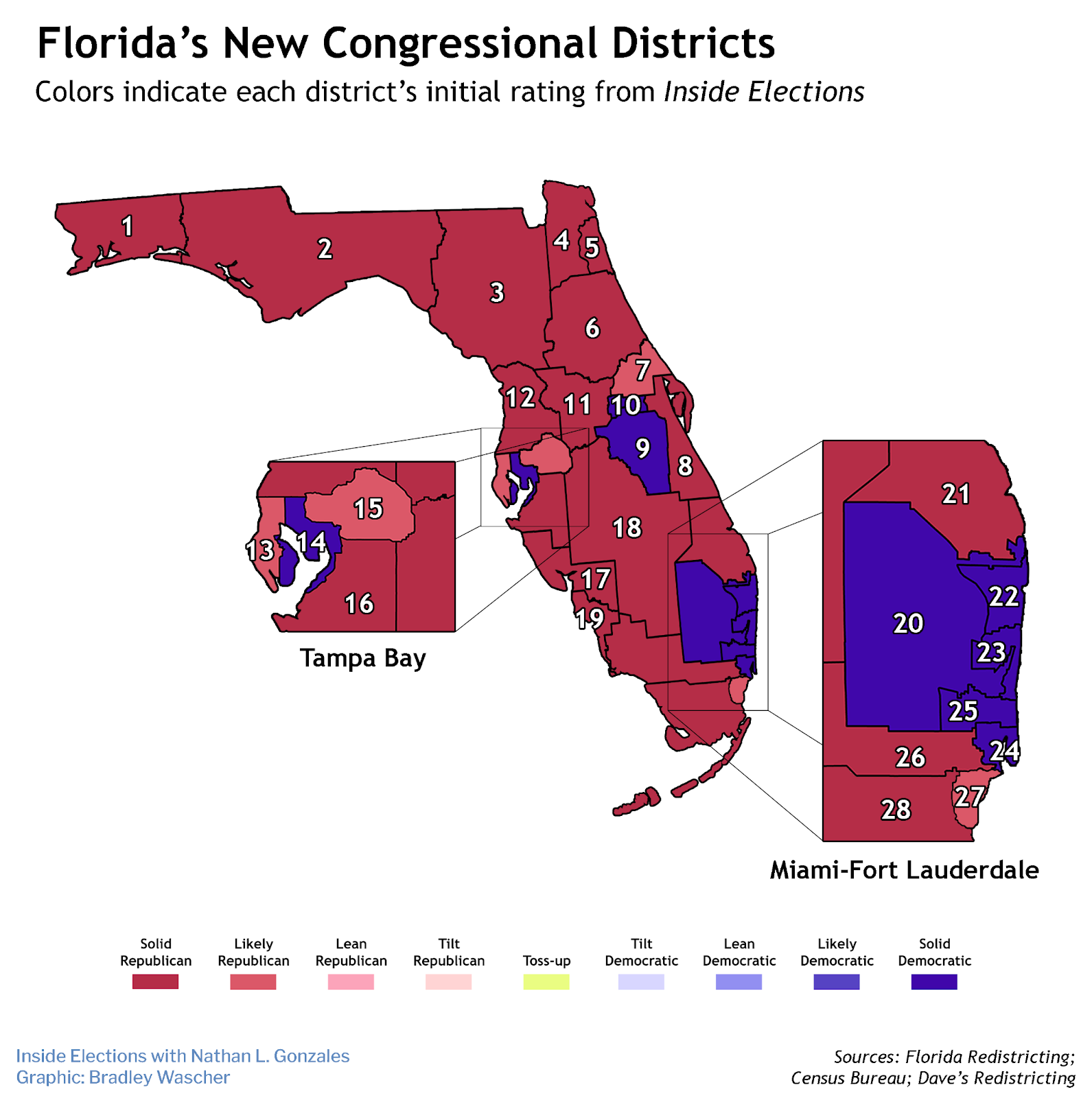 Both chambers of the Republican-controlled Legislature passed separate plans dividing the state. The state House’s map was slightly more biased toward the GOP than the proposal from the state Senate. But for Democrats, either would have been preferable to the map offered by Republican Gov. Ron DeSantis.

Rather than signing one of the Legislature’s proposals, DeSantis vetoed both and proposed his own. The governor specifically took issue with the placement of the 5th District, which is currently a heavily Black seat in North Florida, believing it to be designed unfairly based on race. In response, the DeSantis map effectively eliminates the seat, while also dividing Black voters in the Orlando area between the 10th and 11th districts.

The result is a map that is deeply biased in favor of Republicans.

In the 2020 presidential election, former President Donald Trump would have carried 20 of the state’s new congressional districts, while President Joe Biden would have won the remaining eight — despite Trump only...